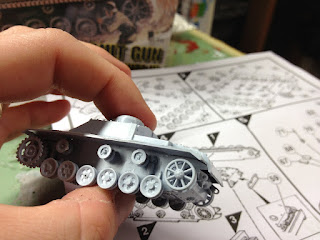 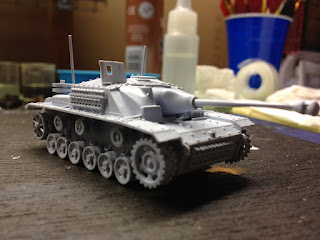 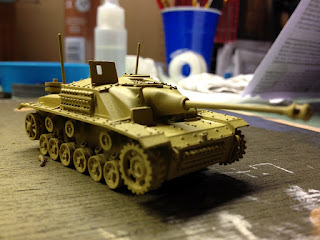 First, hobbytime progress: 1/76 Airfix Stug III- assembled and now base coated. Slightly, "nervous" about the first wash, camo and detail on this "big" scale. Compared to 6mm - my only scale so far.

Anyway, thank you all to the, now 64, followers - and number 64 - my first girl - thanks for joining the IH growing empire Wargaming Girl.

And now some obligatory stats from the first year of the blog
16,582 pageviews
64 followers
149 posts
148 comments (interesting that this is only 1 difference from the total posts number)
Top 5 posts based on pageviews:

Top 5+ posts:
BKC Bulge Game 696  (not sure why, but my guess is popularity of The Bulge)
Johnny Reb III Battle for Oldtown Creek, May 10, 1... 557 views
Dave's Maps and Aircraft Weathering (people like modelling tips)
Where I Meet timmy! and Fly a Spitfire  (cheesy ploy pulling people in with this headline)
Rampant Peace Breaks Out on Wargame Blog  (clever stealing of a title idea from a commenter)
BKCII A Tale of Two Prisoners  (another clever title I can thank my 9 year old for the inspiration)
JR Miniatures for 6mm
Modern 20mm Gamer Interview with timmy!
Terrain - scratch built road(?)
Blitzkrieg Commander II Playaid and Markers

Thank you to Jerry whose games figure so prominently here.
To timmy! and Dave who've contributed a few entries (3 of my top 10 are from/about them), to Dave H for the 6mm inspiration.

I've got to say that I think I would enjoy very much hanging out with the crowd: Ray, Lurker, Wargaming Girl and the rest of their crew. They post often and are often commenting on others blogs giving their insight and obligatory insults to each other. (Which I think is awesome - ribbing each other through other's blogs!)

It's been fun to post, to see the comments and to chronicle my time in the hobby.

There were two things I wanted to do for my 1 year bday:
1. Have enough followers that I could get some store/publisher/mfg to donate or at cost give me something to give away to a lucky follower. Alas, I've not reached that point and most importantly, I didn't ask any. So guess what you all get: a long entry.

2. I wanted to ask my own questions, like the ones I see floating around to my followers so I can get to know my audience better. So, here they go:

My answers
1. Scale Creep Miniatures, GHQ, Games Plus in Chicago
2. Jerry's house. Follow up - in my house.
3. WWII. Because I've been fascinated by my Grandpa's involvelment in the 56th Armored Infantry Battalion, 12th Armored Division and I've been reading WWII books since I was 8.
4. 6mm.
5. Battlefront/Flames of War, Vallejo, various craft paints from Hobby Lobby et al.
6. Blitzkrieg Commader II, Command Decision: Test of Battle (What could be:  Naval Thunder, Impetus, Hail Ceasar/Black Powder)
7. I Ain't Been Shot Mum!
8. I believe I would take up 15mm. First WWII, then Samurai, and maybe some SciFi (Gruntz perhaps?).  It's easier to see, which is nice for painting. But that also is nicer when you're trying to recruit new players. 6mm is awesome, but I think a bigger scale draws people in to the visual drama of miniature gaming. Sure, 1/72 or 28mm would be even better. But for the type of game I would like to play most often, 15mm would be a nice compromise.

And nowadays,  there are plenty of options in terms of mfgs, terrain, and accessories. You can also play games on a 6x4 table relatively easy.

As I began to think about it, I then began thinking of what kind of gaming area would I create for my new 15mm collection?

It would be big enough to hold a 14' x 6' table. And, this table would be easily dividable into 3 6' x 4' tables for smaller battles. In addition, there would be room for some couches on one of the room for people to relax in between games or turns. (Oh, this just hit me, why not some video cameras above the tables to show the action that you could watch on a screen. Sweet Mother of Pearl!).

Around these couches might be room for folding tables so food could be served. Perhaps a wet bar to have a small fridge and to hold some of that food. There would also be room for a flat screen to show the war movies/documentaries/history channel, etc.

Of course there would need to be some staging areas for your minis. How about in little storage pockets under the table? Perhaps also some areas to roll dice, like those gamer chic tables.

This table would be on wheels of course and would be a little shorter than bar height, but you would have bar height chairs, or similar so you rest your weary battle worn legs and keep an eagle's eye view of the battle.

Off to the side would be the paining area, perhaps a room that has all the minis, staging areas, ventilation for airbrushing, video screen for watching tutorials etc. There would be a studio like area for filming and taking good photos.  (As I thought through this - I was like, wait a minute, this all pretty much explains Jerry's place.! I hadn't meant to do that, but sure enough, this is very similar to his place.) See photos of games at his place here:
Jerry's place 1
Jerry's Place 2
Jerry's Place 3

Then I went further and thought that it would be cool to have a gamer's weekend, similar, but much smaller than Blue Table Painting's Valhalla. So, you would need a couple of bathroom's and 2-3 small bedrooms to host some guests.

Friday night would be a rules review and briefing of the big battle taking place the next day. Perhaps a history lesson/movie themed around the next day's big battle. Because everyone had this briefing, you could begin the game a little later in the morning, say 10. Then at the end of the battle around 6 or so, you could sit around a fire/drink/dinner, without a thought of needing to rush home. That evening could be for light games/discussion/movie/reading time/whatever.  The next morning could be some demos of other rulesets, smaller games put on by some of the guests, etc. And then an early afternoon home.

Because I didn't have to worry about time or money. I would also arrange some historical tours and game in some of the locales we were visiting...if allowed. I would also spend time podcasting/video blogging and traveling around to historical battlefields, conventions, and to some of the big collectors/gamers in the hobby. Oh yeah, visiting stores giving them a chance to tell their stories.

I would spend more time making "how-to-play" videos similar to my BKCII walk through on YouTube, but much better quality. Perhaps not up to the quality of the Battlefront videos, but close.

Anyway, just a couple ideas I had floating around in my brain.

I look forward to seeing your answers and to spending the next year with you.

Posted by Itinerant at 6:05 AM