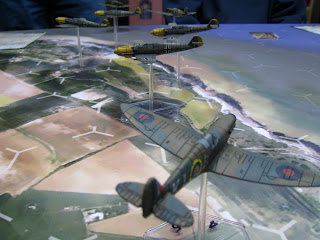 I asked Dave to share how he made his map and how he weathered the planes from Angels 20. I'll let Dave speak for himself:

First on the maps:


The game mat images were all "screen captures" of Google map sections.  The WWI field map surface was already digitally assembled into a high resolution image that I found on a fan website, and I added the trench section from a Google map image I found of a reenactor's battlefield in Pennsylvania.

I used four overlays of the same trench image, but some were flipped, reversed, and rotated so as to break up the regularity of the repeat trench image.  The field and forest terrain on the master image was revealed by cutting away sections of the unwanted trench "overlay" using manipulation tools within my photoshop program (Paint Shop Pro), such as outlining and dragging away unwanted sections wholesale, and fine erasing along the borders of the wanting trench image(s) to reveal the "lower "map's fields and forest.

Lastly, I captured a section of shell holes, and isolated them on a transparent texture layer, which I repeatedly applied to the completed field and trench image to "meld" in the war-torn trench sections to the more pristine surrounding forest and fields.

The WW2 map was a similar process, but I "screen captured" each section of the selected Google map images (from around Dover England), and assembled these into a complete large map image.  As I recall it took something like 10-12 individual screen map images to get the desired breadth of coverage.

The open-ocean texture (beyond the coastal wave images) was a free-source ocean texture I found on the web, which I re-sized for proper scale, and once made into a multi-sectioned large image, was layered and "melded" to the coastal waters using the same image removal and erasing techniques as for the above WWI trench section work.

The hex grid on the WW2 map comes from a number of sections of grids on a transparent layer which I overlaid in sequence to complete the pattern.  Knowing the overall map dimensions wanted, and the number of rows of hexes at a particular individual hex size that should fill the map's area is necessary so that the printed map comes out as desired.   I did "subdue" the opacity of the hex lines by successive eraser swipes (digitally), so that the hex outlines weren't so starkly contrasted against the map's background terrain.

The completed images files can be uploaded to a commercial printer who offers online service, and printed to the selected dimensions (in inches) on vinyl advertising banner material.  Comes delivered to your house in a sturdy packing tube, which serves for transporting the mat to wherever the game calls. :) 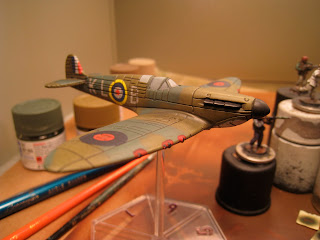 And now, a little about his weathering of the Axis and Allies, Angels 20 planes. The models are pretty impressive as is. But his subtle work helped immerse me even more in the game. Here's Dave:


The pigment I used was "Secret Weapon Weathering Pigment" in "Exhaust Black" color, but I imagine any good brand of pigment will work as long as its dark enough to give a model's etched details enough contrast against the surrounding surface colors.

I applied the pigment powder with a model brush making sure to dust it into the recessed details especially well, basically covering the entire model aircraft's upper surfaces completely with a thin layer of pigment  (doing this over a piece of paper to catch the excess which drops off during the application).

After the pigment is applied, and after cleaning one's fingers off, with two sections of folded-over paper towels in reach, I began to wipe off the pigment on the model by drawing the towel flat across the surface, folding and turning over clean sections as needed (often).

Once the majority of the pigment has been removed, only the pigment in the recesses should remain, providing an enhanced contrast to the panel lines and joints.  With the second paper towel, the insignia and things like painted stripes can be further cleaned with a moisten section of a towel, because the pigment tends to darken these areas, and they'll need to be brightened for better color clarity. 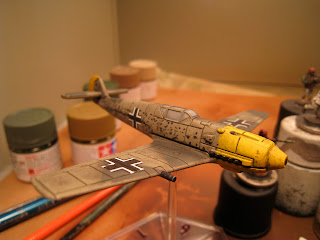 Lastly, the bottom surface must be checked and clean for any over-dusting, and then the model is ready for a coat a clear-flat spray finish, which will seal the pigment under it.

I think the pigment process could be used for other wargaming miniatures also, and especially for vehicles and even buildings.  Any models that have good surface detail (I'm thinking of trying it out on pre-painted WW2 1/144th scale tanks too.

Posted by Itinerant at 8:30 PM