BKCII A Tale of Two Prisoners

I finally finished playing through the scenario my 9yr designed for his map mentioned in earlier posts. He came up with the situation and forces - with minor guidance from me. The OOB was getting crazy as it was. 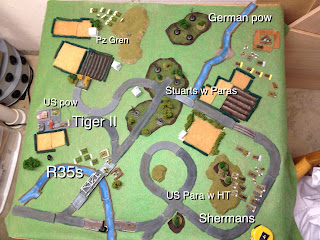 The situation: Both sides, US and German have each captured a very important prisoner and are holding them in town, in the case of the Germans. And, the US is holding their prisoner in a makeshift fort with barbed wire and a trench. In that trench is a 76mm Sherman that can't move out - so essentially it's like a pillbox. I can imagine coming up with some fun backstory for these prisoners and why they were both so important - any ideas?

I'm going to try just hit the highlights (Side note - US is on attack and moves first in the turns.)
Both sides had planned arty and smoke. However, much of it, especially for the Germans was pushed back and cancelled because the enemy wasn't where it was supposed to be. However, at least those registered targets were still available for future arty calls.

The plan:
US - Send the Shermans, Paras, on the left with the Engineer to clear the bridge and 88. Then, if time allowed support the assault on the town with the prisoner, guarded by a Tiger II in an AFV pit. (Hit on 6s and save on 2+...what do you think happened to this King Tiger...yeah, not much.

Send the Stuarts and M8 with Tank riders to get the prisoner. Leave the 57, MG, and Mortar behind to guard the trench fort.

Germans - Send the Pz Grens on the left to get the prisoner. R35, 88, King Tiger, and Volkstrum guard the right flank and bridge.

Turn 1
Germans move the R35s to flank and ambush the Americans who've parked behind a hill. Unfortunately for them, they get in position flanking the HTs ready to fire into their flanks...when they fail a command roll.

Turn 2
Another unfortunate thing for the Germans, they stalled within initiative distance of the paras. This allowed them all to unload without opportunity fire. And then, in the turn, after two commands for the paras and a command with the Shermans, all 3 R35 were gone.

Turn 3
US lose HT and 76mm Sherman to 88 fire. 1 of the German platoons guarding the bridge is pushed back.

On the US left, arty suppresses all Germans guarding the bridge, except the platoon in entrenched. However, the commands aren't there to bring on a close assault by the US. Also, US command is hesitant to CA the platoon in the trench that isn't suppressed.

US right is planning to go around the fields, in protection of the fields and hedges, and approach the town from the back.

King Tiger, however, doesn't have any problem with command, getting 3 in a row and takes out, on the hill, the M8 Scott M8 Greyhound, and a Stuart. Earning that Iron Cross.

Turn 5
During US initiative, they finally suppress the platoon in the trench, Close assault and take them out. In addition, some good Sherman shooting takes out the 88.

US Engineers make to bridge, next to barbed wire but takes 3 hits from the Tiger.

A US mortar is taken out during initiative on the German left as they approach the trench prison.
The Tiger, with much celebration by the US, fails command rolls and is silent for a turn. Germans attempt to go in for the Close Assault on the prison after laying down smoke. Again, command falls short.

The Germans are working their way through the trenches at the fort and have taken out the MG. Next up a CA of the Sherman.

Turn 7
During Initiative and two snake eye command rolls in a row(!), two Shermans attack the Tiger from the flank. After rolling30 dice, they get several 6es, but most are saved, except 1. They roll a 6 to hit. The Tiger rolls a 1 to fail a save. And then, MIRACLE, rolls a 6 to suppress!!!

They Engineers successfully clear the bridge.

The US gets into town, destroys the German CO, and rescues their prisoner!

Over on the other side of the map, the Germans close assault, like crazy, the Sherman. He suppresses many of the them, but they go in anyway because of the overwhelming numbers and the support - Blam! They take it out.

The prisoner loads up on one of the transports to see if they can make it back. They get one more command to go 25cm. They fail a command.

Turn 8
US has accomplished their missions and now stay out of the way of the Tiger who can only react fire and opp fire. In addition, with the Grens obviously rushing back down the side of the table, the Stuarts take up positions to shoot and block them.

However, that won't be necessary because the Grens fail their command roll!

Game over.
Also, the Germans had hit their breakpoint, but right at it, so they only needed to get a 9 or lower, they passed on turns 7 and 8.

Seemed like game started with both sides getting lots of failed or 1 time command rolls. However, there were several multiple commands. 1 blunder that caused a German MG to blunder into a CA with a HT. unfortunately, the HT had tons of support. I had two bonus rolls (rolling (2) ones on the command roll) in a row! Just at the opportune time for the US. 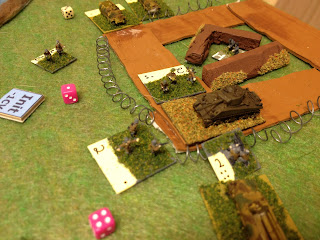 Posted by Itinerant at 7:49 PM