Took a break from the Drydock to play this table my 9yr old setup. Will provide a more detailed AAR when it's finished. I'm through two turns and the US has already destroyed a German reclaimed R35 platoon.

The Germans had "surprised" the US platoon that was going to attack from behind a hill. However, failed command rolls left the R35s in the open.

The next turn saw a rain of bazooka and Sherman fire take em down. The Co had to command them because both platoons had failed their initial command rolls. 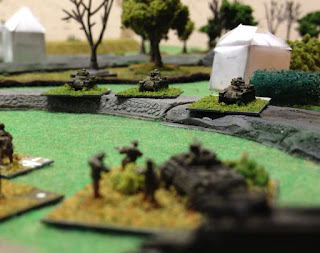 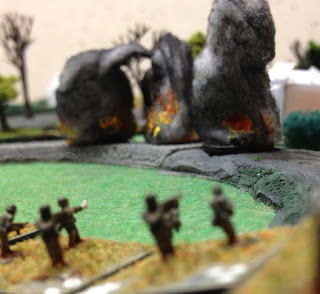 My other hobby stuff was my work on getting the volunteers/potentials lined up for Geekway 2012. This will take up a bit more time as we move deeper into April and May.

BMHGA is asking for GMs for Barracks Battles at Die-Con. I would love to, but don't know, w Geekway stuff if I can make that happen.

Posted by Itinerant at 6:29 PM