A few things that have come up via email, blog posts of interest I've seen and couple other topics...

Maps to Fly By 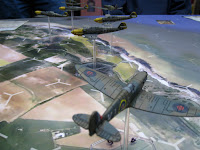 Dave, creator of the map seen a couple posts ago has had a few questions about how his map and how he created it and if the file is available.  Yes, it is. He posted it over at Board Game Geek. Go check it out.  Thanks Dave for providing it.

Sales and Marketing
I don't play Flames of War and currently don't have any plans to do so. But that doesn't mean I'm not impressed like crazy at the company they are building. They have a very active forum. They gave away free v3 rule books to previous v2 buyers (GREAT), they get people involved in historical gaming (and some do/might transition to other games), and it brings history alive to people who might not otherwise have paid much attention to WWII. I'm aware of many of the issues with the game.

And, most impressive to me are the videos they're creating to teach newbies the game. The first one was kind of stiff, but that's gotten better. I'm not sure about the uniforms...this may actually "scare" a few people off, whatever. They seem to be growing fine without this, yet, they're taking the time and money to make these videos. Very well done and very informative to learn the game.

Don't Know Much About History
Speaking of learning about history, The Wargaming Site blog is running a great series of entries called "Famous Battles You Should Know About". He's giving some history about battles that we all hear about or played but may not know much about. With these he gives history, tactics, why the battle mattered, how to wargame it, etc. Great stuff - keep it up.  So far he's covered Gaugamela, Waterloo, and Zama.

Even More History and Possible Con Scenario
Over on the Yahoo 6mm wargaming group, someone shared with me something called Task Force Baum.  A task force put together in March 1945 to go liberate a POW camp...or rescue Patton's son-in-law, or feint an attack, or...whatever, it was a disaster.  He shared this with me after reading my previous post on A Tale of Two Prisoners.  But this may make a fun Con Scenario that could be played in a 2-3 hour slot.

Back to Dave: he recommended a club newsletter called, "Warning Order." I'd seen it and read several of them before. However, thank you Dave for bringing it back to my attention. It's an amazing creation from a club. Free and lots of AARs and reviews.  Keep it up guys.

Bring The Pain and Links
Finally, and this is a link fest blog post, so this is appropriate to "discuss": I saw a somewhat off the cuff remark in a post at World of Wonder via the House of Paincakes (speaking of link fests) that mentioned something about link-filled blog posts. The author and interviewee favored putting all the links at the end of the blog post. One argument is that people may not finish the article and get lost in the links to a never-ending rabbit hole. I can see that argument, but I also like all the links.

Which do you prefer:
Links embedded in the post?
or
Links at the end of the post?

That was going to be my last comment, but then I remembered the post I saw at Lord Ashram's about the new turn based iPad war game called Battle Academy. Looks pretty cool. And to think it may only cost me $820 to buy...'cause I don't have an iPad...though maybe I need to do that? Right.
I'm going to say it again about Lord Ashram's table - AWESOME. And let's end this post with a shot of this great table and room: 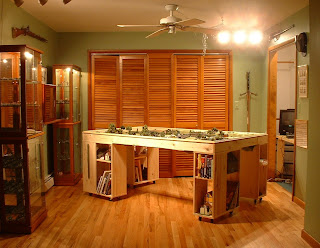 Posted by Itinerant at 9:39 PM