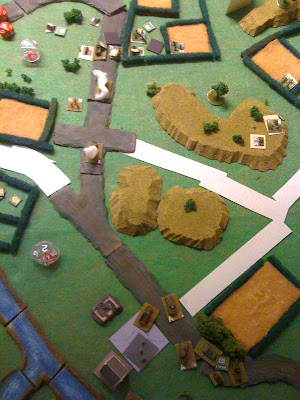 I had a US Platoon next to Bocage, I didn't close assault, they're on one side of bocage and German platoon is on the other. The question: is there still cover for the platoons? They're behind bocage. Sure, they're right there, but wouldn't they be harder to hit, cause they're firing over and through that stuff? But, on the other hand, it seems a tad odd. In fact, i can't believe I ruled it that way.

I BN moved up/over from the East, actually came in last turn, just forgot to mention it. They made it to le Motey with I BN HQ setting up shop there. Nice base for Arty spotting and morale.


B and C Cos basically got themselves set behind bocage for the inevitable march toward the towns and the open fields of fire. I Bn command will call in smoke in front of the infantry gun...but now I realized that I'm focusing too much on the Northern town. It's the one just to the South of it where I need to concentrate my efforts. I'm going to have to rethink how I approach the town.

I've also got some questions concerning the spotting of troops. 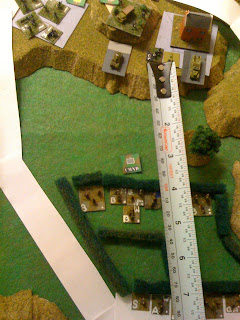 1. Is a unit spotted behind bocage if they fire, yet the rules say that you have to be on the edge of bocage to see the units.

2. I'm also wondering about what units see at different levels. In the picture in the lower left, with the gigantic ruler of god over the battlefield, I'm wondering if the BCo (the US Stands behind the bocage, nearest the hill would have been spotted when crossing over the bocage in the back (Where CCo now resides.) toward the spot where they are now.

I think not because the level two bocage is always closer to the US troops than to the Germans. Now, I'm not confident of the BN HQ atop the level 2 hill. Based on what I read in the rules, I don't think so.