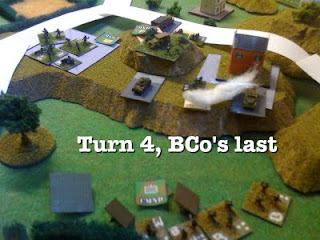 Quite eventful. The US arty pinned the German Co covering the US left flank. Effectively knocking down their shooting ability, because on top of pinned, they were suppressed. This is a big role is supposed to play. ACo was able to lay enough fire on them to kill one unit. Which, when the morale phase rolled along, they suffered some big penalties and were required to fall back and became demoralized. Which effectively shuts them down a few turns. ACo will be pressing hard this next turn.

On the center I Battalion will have to Hasty advance each turn to make it to the road junction. I've decided to move them in that direction because I don't see them knocking those Germans out of the objective town at the crossroads by the end of Turn 8. 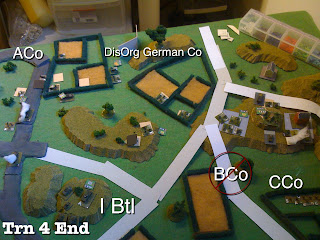 Which brings us to the Germans covering the center. They were given the command to hold. However, I'm wondering now if they should fall back to positions closer to the road objective. They could still move under the cover of the hill and bocage and be able to get all the way back to the road. Thus being within 6cm of it. Perhaps the next turn.

One thing I could've done was to move two platoons back and leave the command and weapons team on the hill. However, this would put them out of command. And one thing I'm not clear on: if a unit is out of command, can they fire either in prep, opp, general?

On the right, it was disaster for the US. BCo went through the hedges. (Should've saved smoke for this turn.) Sure, the infantry gun couldn't see them...but the R35, Weapons team, and Platoon in the objective city could. They took out an infantry platoon, the mortar team, and the weapons team. The subsequent morale check caused them to be eliminated - the whole company.

The question is, does CCo need to take a morale check because they saw a company eliminated? I wouldn't think so during the morale phase. It's all happening at the same time.  Frankly, I'm not sure what to do with CCo. When they step through the hedges, it's all going to happen again. Maybe, go around the hills to the right? 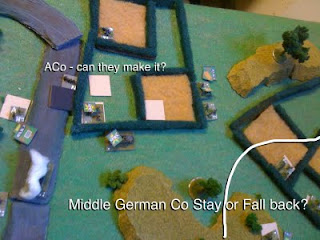 This turn shows a big part of this game coming through: command and morale. For example, the center dilemma for the Germans - do you purposefully spread your company out? One the US left - pinning a couple of the platoons, pins the entire platoon. Then by killing one, the entire platoon suffers the penalties and are all forced back and demoralized. Pretty heavy price to pay. This was the toughest aspect of this game to get used to. Then, of course on the US right, BCo being eliminated because of an extremely high morale roll. Heavy stuff. -6 modifiers alone because 3 units were eliminated. Then, being within 12cm of an AFV and of personnel.

Posted by Itinerant at 7:47 PM