Germans need to take the towns of Neffe, Mageret, and Longvilly in 3 turns. Plan is take the KG 902 Division
from Niederwampach to attempt a capture of both Mageret adn Neffe in Turn 1 before the airborne troops enter
in turn 2. The 77/26 VG will follow them to hold those towns as the KG will need to be used to take Longvilly in turns 2
and 3. 78/26 VG will hit Longvilly, mainly to threaten the town. I don't think they have what it takes to overwhelm the forces there.

Turn 1 18 Dec 1944
Germans - Success! Neffe and Mageret taken in turn 1. Wall of KG await the Airborne. During Expoitation, 7/130/902 was able to
begin whittling down the outer Western defenses of Longvilly. However, the 26VG attack to the North of Longvilly saw defeat as US
Arty did it's job of taking out a SMG Co. The rest of VG stayed a hex away to keep from getting barraged. Attacking will be tough
because you can only have 2 steps worth of units in a hex and all these units are attack of "1" and defenders are at least 3 or more. 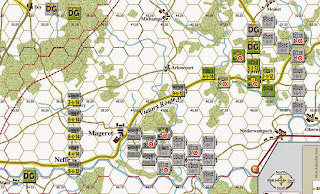