Turn 2 19 December 1944
US - Brought in 501 Airborne to attempt an eventual retake of Neffe. Swung the bulk to the North of the German
lines in a plan to trap one or two units. I think I'll simply concentrate on taking Neffe back. That will be a draw.
North of Longvilly, Co A Armored took out the las SMG of the 26VG.

Germans - Neffe and Mageret reinforced with VG. KG 902 moved out to attack Longvilly from the West.
Pz Gren made it into the WEstern part of town. In addition, three arty units were dispatched. Feel pretty
good about holding Neffe and Mageret. Not sure on taking Longvilly. Though there's only one
hex to take. Cautiously optimistic. 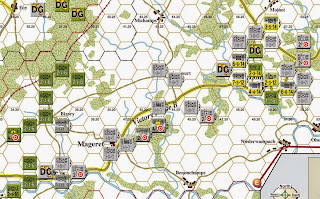