Germans need to take the towns of Neffe, Mageret, and Longvilly in 3 turns. Plan is take the KG 902 Division from Niederwampach to attempt a capture of both Mageret adn Neffe in Turn 1 before the airborne troops enter in turn 2. The 77/26 VG will follow them to hold those towns as the KG will need to be used to take Longvilly in turns 2 and 3. 78/26 VG will hit Longvilly, mainly to threaten the town. I don't think they have what it takes to overwhelm the forces there.

Germans - Success! Neffe and Mageret taken in turn 1. Wall of KG await the Airborne. During Expoitation, 7/130/902 was able to begin whittling down the outer Western defenses of Longvilly. However, the 26VG attack to the North of Longvilly saw defeat as US Arty did it's job of taking out a SMG Co. The rest of VG stayed a hex away to keep from getting barraged. Attacking will be tough because you can only have 2 steps worth of units in a hex and all these units are attack of "1" and defenders are at least 3 or more.

US - Brought in 501 Airborne to attempt an eventual retake of Neffe. Swung the bulk to the North of the German lines in a plan to trap one or two units. I think I'll simply concentrate on taking Neffe back. That will be a draw.

North of Longvilly, Co A Armored took out the las SMG of the 26VG.

Germans - Neffe and Mageret reinforced with VG. KG 902 moved out to attack Longvilly from the West.

Pz Gren made it into the WEstern part of town. In addition, three arty units were dispatched. Feel pretty good about holding Neffe and Mageret. Not sure on taking Longvilly. Though there's only one hex to take. Cautiously optimistic.

US - Poor planning on my part left the Amis without much attack options to clear any of the towns. It was basically up to C/482/CCR to hold the Eastern half of Longvilly. Let's see what happens.

Germans - Success! Barraged, like crazy the unit in the Easter half of Longvilly, with 7 different arty units, hit them one time for a DG and one step loss. Germans then sent in3 units from KG 902 and one from 26VG, successfully rolling at D1R1 result which was exactly what was needed to clear them out and then to advance into town. German Major victory. 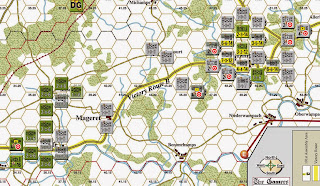 Posted by Itinerant at 5:59 AM