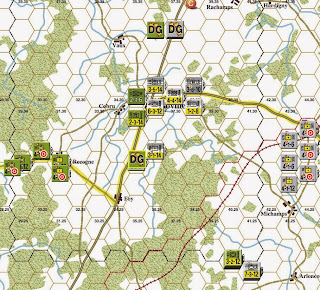 Bastogne SCS Scenario 5.1
This is a two turn intro scenario turns 2 & 3. Germans must clear victory route Alpha.
Turn 2 Germans
Exploitation failed in both attempts and caused the loss of a step in both cases. US Arty DGed all 3 frontline
units. German Arty managed to kill off 3 steps worth of US defenders.

Turn 2 US
The Germans don't stand a chance at winning this. With the added 3 Airborne companies, this Victory
Route A is pretty strong, considering they only have 2 turns to clear it.

Turn 3 German
Game over - Allied Victory - The Germans got closer than I thought they would. However, they lost PZ
units like crazy. To get a major victory they were only allowed to lose 1 PZ unit step loss. Arty made sure
that didn't happen. There were just two units left on Route A. I moved those Arty units on Route A, but I
can't imagine that is supposed to be allowed.

You have to remember to use overrun and exploitation effectively in this series.

Next up, the The Battle for Longvilly, Mageret and Neffe.
Posted by Itinerant at 11:16 AM