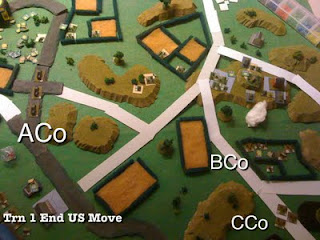 Game in progress.
US move, hold command for all Germans. No opp fire because they don't want to reveal themselves.
Took me 1 hour to do this much 'cause I needed to sort out my order/effect chits. (Another to do - decoupage those bad boys onto some cubes.)
And of course rule look-ups. Need to look up Close assault with troops in Half Tracks. Should I lay smoke, dismount, CA, and support with HmGs on HTs? Or, rush up there with HTs, then dismount?
If troops moved through open fields to rush behind bocage, are they now concealed or something else.
This I what I like about games, you can read about something all you want and think you have it. But once the dice start rolling, half of what you read leaves you. But after a play or two the basics stick.