Or, where Toddy (aka Itinerant Hobbyist) learns armor and the power of a crew armed with a PFaust. 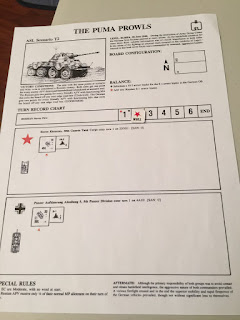 This is the second game I played while at Jim's on a mid week/holiday ASL day.

I wanted to learn armor so I can continue my deep dive into ASL. The Puma Prowls scenario is a famous one in ASL circles as one to teach one armor. I was Germans and Jim the Russians. I didn't get too many pics of this one.

To get to the point - I won as the Germans. But as usual, it was close. And, I don't know how easy Jim was being with me.

And now I've waited too long to finish writing this one, so some of the memories and lessons learned have faded a bit.

However, the biggest thing I remember, one of my crews survived their Crew Survival roll and ran into the town where the Soviet T-70s were hiding and taking out my tanks. The crew found they had a PanzerFaust on them and decided to risk firing in the building (back blast). They survived that but missed the target. The next and last turn, they ran out into the open street to get a back side adjacent shot. As they ran, an immobilized T-70 fired it's mg and though getting close, they crew moved on. The T-70 then fired it's main gun and missed! They then fired the faust and destroyed the tank and crew! I didn't get a picture of this situation. I will say that it essentially won the game because I needed to knock one of his guys out and they did it. Very cool scene.

And now some pics: 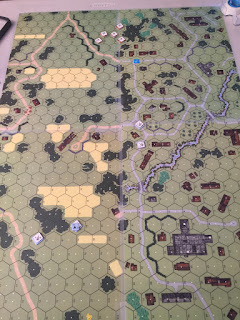 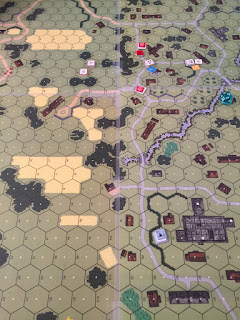 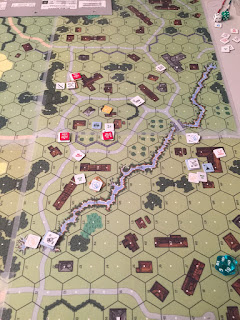 Here's what Doug and Ken were playing. Sorry, not a whole lot to say about it, because I was too taken by my games to understand what was going on. I will just say that they played a lot faster than I was. 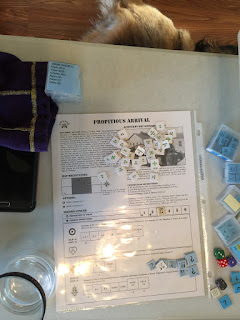 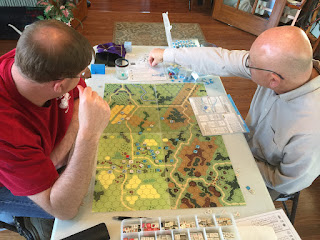 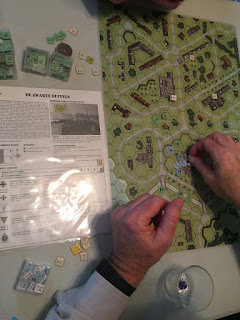 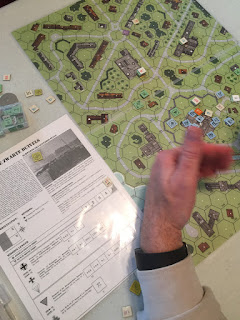 Posted by Itinerant at 9:14 PM