Germans in the street, under withering fire from MMG, fire into the building with 24 firepower and only cause
2 casualties, but they break, so that 's a good thing.
The northern Russian Mortar gets cocky and tries to do more damage to the tank...to no effect.

The immobile German tank then turns it's turret and fires on the Russian mortar in the junkyard in J9. 5 casualties.
Yeah, they're gone.

Looking bleak for the Russians. But the Germans have a task when it comes to taking that last building.

Germans take the Northern Objective buidling with Melee against broken units. The LMG crew in I13 are also taken out in Melee.
The working PZIV runs over and eliminates the norther wire and sets up right next to the building. Germans hope they get initative
next turn.

Because that building has the Commissar in it, that building is a Fanatic Ressistnace Nest. All personel are considered as though they're
under a courage marker. This means they don't have to take Morale Checks, they may fire any type of weapon with no penalties for reduced
crews including leaders as crews. Wow, this building is going to be tough.

The Commissar infiltrated back a hex to not be right next to the tank. First chance he gets, he will move back one more. He only
has to be in the building to cause this. 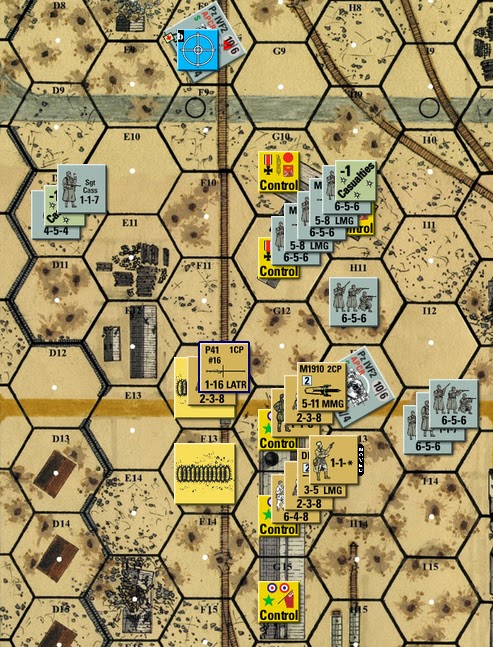 Posted by Itinerant at 9:30 AM