November 1940 - AFRIKA II, MMP
Axis - Pulled units back to make a defensive line. Destroyed the pesky Allied LRDG with our Camel
Group and a rebuilt 1Med Armored. However the Armored was destroyed beyond use and was
put away to the "dead" pile.
Will build more defense in depth and will bring in a 3rd line of defense in the Halfaya pass. 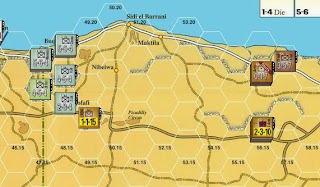 ​
Allies
Received some great reinforcements as we build up for our offensive to capture Bardia -
or course supply will be an issue. I want to build up some comfortable levels before attacking.
This kind of supply limits much in the way of "Blitzkrieg" style of attacks. Unless we're able to capture some
supply and ports.

Conducted a probing attack on the left flank with exploitable units and reduced a unit, while also
taking some damage. In addition, the LRDG is left in a very vulnerable spot and survival in
December is not likely.
Posted by Itinerant at 11:46 AM