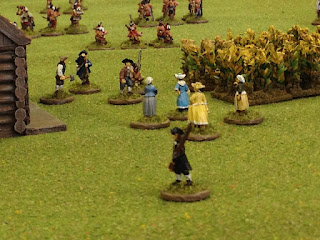 A couple weekends ago I stopped by The Wargamer's Cave to pick up some Plastic Soldier Company Heavy Russian Weapons. In addition, I was meeting Joe to take some unpainted "lead" off his hands - for a great price. Joe was there running a game of Sharpe Practice, from Too Fat Lardies.

First of all, thank you to the players, Blake, Steve and Dennis for letting me interrupt the  game so Joe and I could make the deal. I just watched the first couple of turns and it looked interesting. Of course, I couldn't resist and snapped a couple pics before the game.  I asked Joe in an email how the game went and he sent me this: 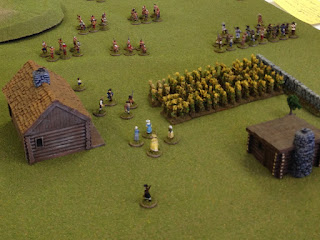 The game went well, it appears to have been well received.  The French allied Indians were played by Steve and Blake.  The English colonists was played by Dennis.  The Indians won the game but with a loss.  The Indians succeed in killing the male colonists and captured all of the women and the boy, plus burned down the main cabin just in time before local militia arrived.  However the Indians lost 10 of the 27 warriors on the raid. 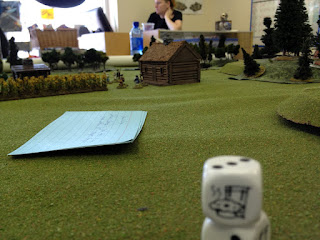 Then he went and posted an incredibly detailed post on his blog over at Sapper Joes' Wargaming and Toys.

BTW, Steve, one of the Native American players - pictured on Joe's site is working on a 15mm army for IABSM as well. 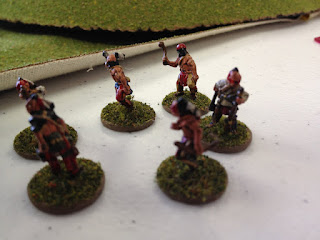 Posted by Itinerant at 3:30 AM

Email ThisBlogThis!Share to TwitterShare to FacebookShare to Pinterest
Labels: Too Fat Lardies