I ran two lances against each other to test out the Quickstrike rules variant as published in Strategic Operations from Catalyst Labs.

I don't know the fluff enough to make some cool AAR why these two met up. Since my son's paint jobs aren't consistent with any particular faction, I want to say it's pirates/splinter groups meeting to settle a disputed territory..

Objective: learn the rules and destroy the majority of the other's mechs.

Atlas lance was going to have Atlas and Vindicator go around the left flank while the Jenner took long range shots from the level 3 wooded hill on the right. Finally, the Jäger would skirt behind the hill on the right, staying out the fight for a few rounds and then popping in from the right to pincer the other team.

Cyclops was focused on getting to the center of the board to use the lake and woods as cover and cooling. The plan was to keep the long range firing Dragon in the woods near the starting edge to take advantage of cover.

Highlights:
Dragon changed the plan and decided to move into the woods near the lake . Bad plan, by the end of turn 2 or 3, the Dragon was destroyed as you can see in the first pic.

The Atlas took some serious hits from a massed attack by three units. Still in the game, but was suffering.

The Cyclops was part of that big fire group. Unfortunately, to do this he used all his heat and shut down. This allowed the Jenner to jump into the water, use extra heat to increase damage, and take advantage of the water cooling to finish the Cyclops off.

The game ended with Cyclops, Dragon, and Hunchback destroyed. The Jenner was chased from the battle by the Vindicator, unable to move quickly away because of a movement point hit.

Enjoyed it. Need to clear up a few things an will post some game thoughts later. 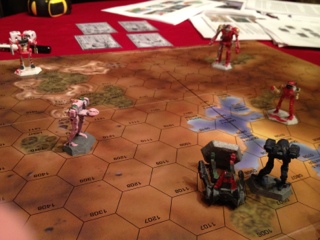 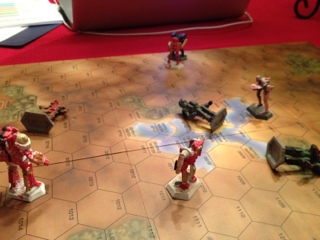