Played my first big game of Johnny Reb III at Jerry's. Same group that put on the Command Decision TOB games that I posted about awhile back: Duel at Barenton and Battle for Moselle.

(Side note: The book that we were playtesting those scenarios for has been published. It is titled, "From Normandy to Lorraine: The American Drive to the Rhine," by Jack Strangeway. It is available at the Test of Battle Games website for sale. I still need to pick up my copy. Oh yeah, check out the credits page, my name is on there as a playtester. Send me your copies and I will sign them for $100 each...any takers?)

Back to the main topic, Johnny Reb III. Played with 8 other guys. That's a lot. I was a Union Commander, Wilstar. I handled a brigade, which in this game is 20 stands of soldiers. Each stand represents a "company" (4 men on each stand and some with 3 on a stand.) 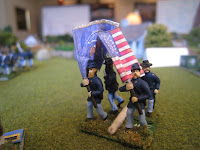 4 stands are grouped together to form a regiment and 5 regiments are grouped together to form a brigade. This era is all new to me and I'm still learning the terminology. Pat and I had the Union Right flank and we successfully managed to get more units on the hill (just one more) than our confederate foe (Ed) by game end. Though, our Union left failed to get more units on than the Confederates. Confederates won 21 stands to 12. It all came down to the last two turns of charges and testing for officer casualties. Just like at Command Con, I had more fun playing it than I thought I would.

Again, Jerry is an incredible host and all the guys: Pat, Ed, Bill, Jim, John, Rollie, and Dave (fellow noob at JRIII) were an incredible group to play with and against. Jerry's table was amazing and immersive.

Here are a few pics from the game and links to the Picasa web album.

Posted by Itinerant at 9:43 PM