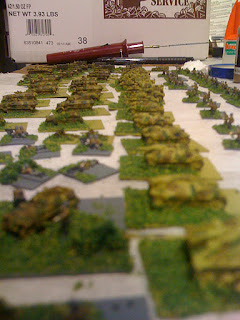 109 stands based tonight. Oh yeah, painted the flesh on 40+ infantry stands. All that in 2.5 hours. Man, it's late.  Paint, label, and matte varnish and I'm complete with those.

Next, I'm just going to make a couple touch up US stands and that will be done. The biggest chunk of these had been started and I just wanted to get them off the table. Though I may use some of them for the upcoming Con game.

Which appears to be all I'm doing for the hobby - which is true.

My biggest goal out of all this: come away with 3-4 potential regular players. I'm tempted to buy a few of the rule books so that people can get them right away, if they're interested. Sometimes finding rule books can be a challenge and the easier it is to get, the more likely someone will get into it.

I'm also considering putting together a 750 point each army battle on Sunday as a demo game. Easy terrain, hodge podge army. Another chance to rope people in. I was thinking of a FWC battle, but that would be a lot more work. Maybe a samurai game using some rule set and paper...too much to learn by then.