First playtest and run through of the rules happened on Thursday night. My two generals were Harry for the Germans and Bill for the US. Both are veteran miniature players but had never played BKC II before. It was a good test for me to see if I could explain the rules in a clear enough manner to get a couple guys playing.

I would say I was successful getting the rules out there. Took a little longer to make it happen, but they grasped the basics clearly enough. It took longer, because I was still working through how much and what I wanted to say.  I just need to outline the order I want to cover things and make it more succinct.

They actually played the game for 4 hours and we only made it through 3 turns. Now, there was only two of them and they had a lot to command. Bill, US,  for example had 2 infantry commands, an FAO, the CO, 2 Recces, and a tank command. Then on turn 3 he got another infantry and another tank command. The Germans are very similar.

It's a lot to command, especially when you're learning the mechanics of a new game. I mentioned that it might go a little quicker with 2 more players. They could all be thinking about their moves while the other active player it moving. Bill thought that it might actually take longer - more guys to stand around and BS - I'm leaning his way now.

The only special rule I had was that fog was thick the first two turns, allowing only 30cm spotting. I raised it to 50cm in turn 3.

So I've got some serious thinking to do on the size of scenario front. Size of map. Suggestions and thoughts:
1. Smaller Herrilsheim - the city is now made up of 14 separate BUAs. Perhaps just have 3 stone/brick ones (bigger) and 3-4 smaller ones.

2. Make the map smaller. or

3. Place the units closer together. For example, the US troops that come in on turn 3. Have them come on in turn 2. More aggressively, start the game as though it is turn 2.
3a. Have the Infantry company, 119th Engineers that come in with the 23rd AB just be tank riders. It initially eliminates a command so the player doesn't have to control two commands until they disembark. 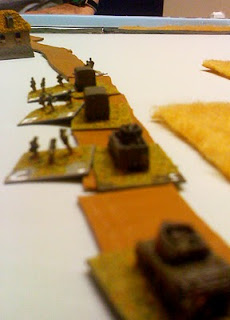 Mistakes made:
1. Forgot Initiative and Opp Fire penalties until turn 3. Want markers for these anyway to help me remember.

2. Had FAOs call in multiple fire.

Other concerns/questions that came up:
1. They were amazed at the size of the arty templates. Frankly, I'm amazed by them as well and that's using the smaller ones listed in the optional rules.

2. I probably won't worry about deploy actions for mortars and IGs. Simply to save time and get people shooting sooner.

2. Copies of the weapons charts - and draw lines on them so they can read across the lines more easily.

3. Save chart - save values for various buildings etc.

4. Communication Marker to know if Recce can do anything that turn. Perhaps even a reminder what they did.

6. Make the blunder sheets for the longer term effect blunders. 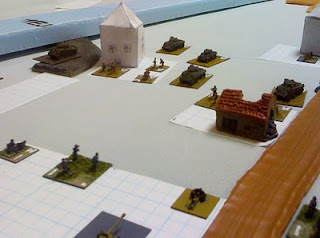 7. Make a more clear mission sheet.
US Major victory - 1/2 of Herrislsheim, 2 of which is a big block (stone concrete block)
US Minor victory - Hold what they have (will have to determine this)
US Moral victory - survive the game with over half of the fighting units on the table.

The guys said they had a good time and would play again - that's good! I just need to tighten it up - a lot.

Posted by Itinerant at 6:22 PM