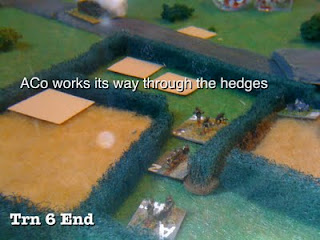 German Victory by about 12cm!

ACo was the most likely to pull this off. They were slowed down by H&I fire in turn 7 because I had only placed them under Cautious advance.

Their halftrack was going to be able to make it to the exit point objective - with a possible fight on it's hands with 2 German platoons from 1Co. So, in the orders for turn 8 they were put under cautious advance - my thinking - they would need more favorable numbers when battling and didn't need the negative die roll modifier that is applied when you hasty advance. Well, good H&I rolling for turn 8 landed smack in front of the Halftrack! They can't move. 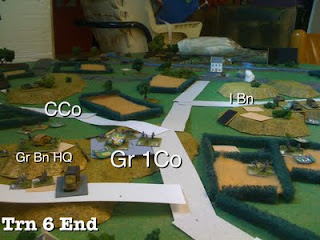 For the Germans, this was a good thing because the 2 platoons they'd sent out to defend that space ended up being pinned and suppressed about 10cm from the point. They wouldn't have been able to lay down any effective fire.

Definitely learned more about the game and things to think about when playing. I would not favor this as a solo game. A lot going on and each turn took me about 45 minutes a pop. 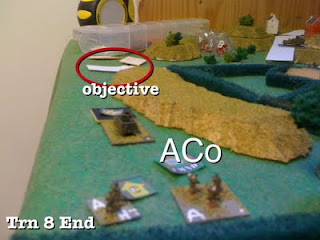 I feel a lot better about being on the attack. Though I had a heck of a time with the city. Next time I wonder if I should concentrate on the center with more of the force.

I received some great answers to my questions over at the Test of Battle forums - go check them out - mainly from the author - not bad. 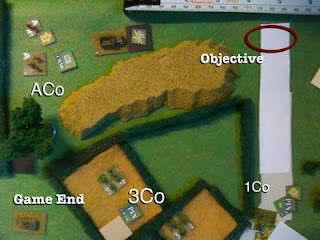 I was going to replay this in Blitzkrieg Commander to test the differences. A couple things has changed my mind about this: 1. I'm done with this scenario - I took too long to play it. 2. and most important - I'm sent in my registration to do my first ever GMing of a game at a small con held here in St Louis called Command Con in November. I will be running a BKC II game! Nervous and excited. More in an upcoming post.

Posted by Itinerant at 7:54 PM