Isle of the Rat Wizard Far Away Land RPG AAR 1


Nimiel a bow-hunter and Quickshadow a reluctant ninja are ship wrecked on an island. They’ve told the islanders they were on their way to North ‘Merica. (We need to work on this.) They are taken in by the citizens of the only town on the island. The town is Hallo. 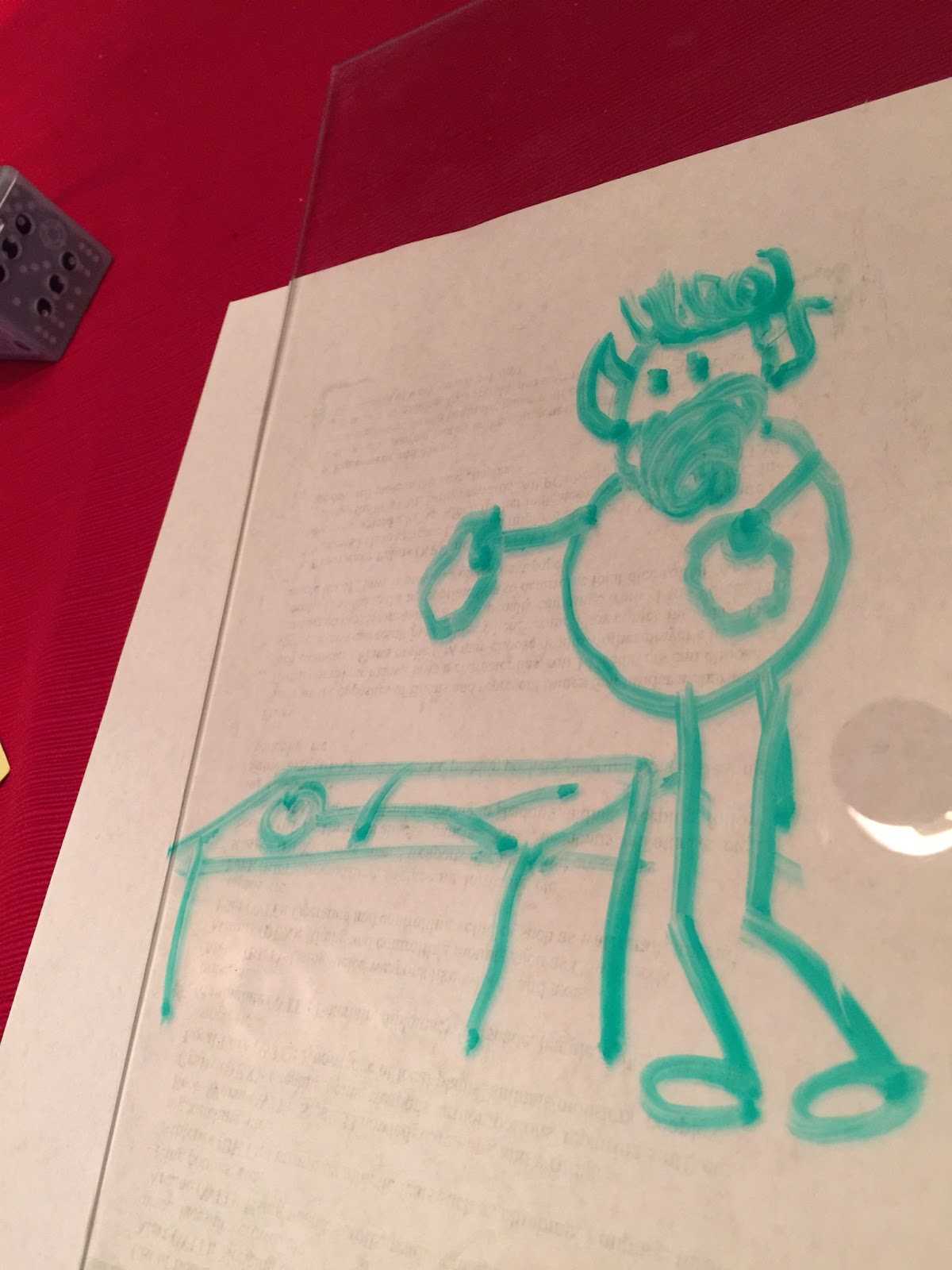 Marilanne Jonas Anne Smith, bearded female town nurse, is taking care of them when they wake up two days later. My son draws her out quickly and appears in the drawing to be about 10-12’ tall. I ran with it. She’s supposed to be human though.


Bor is the leader of the village and is a loud gregarious fellow. He’s immediately thrown for a loop when Nimiel accuses him of collaborating with the Rat King. This throws Bor into a fit and outrage and he storms out of the room where he’d been visiting the recovering young heroes.


Marilanne leaves the room as well and immediately Quickshadow wants to steal something. But before they can do it, Marilanne comes back into the room. Bor returns, having calmed down. However, Nimiel reveals that he accused Bor because he’d had dreams on the boat of Bor and the Rat King talking and collaborating. Nimiel notices some poison and truth serum and asks if he can have some. He also asks for his weapons.


Needless to say, Bor starts to get worked up a bit. Quickshadow, seeing that this line of conversation wasn’t going to help them, talks Bor down and says that they’ll fight for them. Bor makes them an offer. Capture a ratling, bring it back and question it on the best way to make it to the Rat King and this will prove to Bor that the heroes are not there to threaten him.


Nimiel and Quickshadow head out that night to capture a ratling. As they’re walking they hear some rustling and Quickshadow dashes off into the trees to flank what they believe to be a ratling. Nimiel stays on the trail, almost as bait, and prepares his bow by tying a rope on the end. His goal, as the ratling nears, shoot the arrow, bounce it off a tree on one side of the ratling sending it across the ratling’s path to trip it.


Using a target number of 5, he rolls a 7. In addition, as he shoots the ratling is distracted because he smells something in Quickshadow’s direction. Nimiel hits a tree, and another and starts to wrap the ratling in a maze of rope. Quickshadow jumps into action and successfully ties and binds the rattling up.


As the 60 minute session ends they are heading off to the village with the ratling prisoner.


I won’t write this detailed of session reports in the future, I’m just trying to remember all that happened. And to think of improvements for next time.

This is Far Away Land a new RPG I discovered and dig because the artwork is cool, the creator seems to have some brainwaves that I understand, the game is pretty simple (just my speed), and the world is wacky. I'm mixed on how wacky it is, because there are also consequences, characters can die and heavy things can happen.
Pacing: Need to work on this a bit. I’m slow as i learn the rules and as they throw loops for me, but I felt like it drug on a bit.


I’ve only played 2 year long campaigns plus a couple of one offs. Only GMed my boys a couple of times for quick sessions. They neither one has any experience with role playing, except for the couple of times with me. So, we’re all a little tight with it. The tightness comes from me because I’m trying to play with the rules and make it fun and fair for them.


Because we’re all new to this, i need to step back and give them some meta advice occasionally. For example, give them some ideas on what to do in a situation. They’ll talk through things and I’m not sure if they’re talking as their character or as players. I just want to make sure everyone is clear on what is happening and what they’re deciding to do. I may have this nurse be a guide for them.