July 1-10, 2944 - Turn 3
Allies - 7 Air points for the Allies. Nice. Rebuilt reduced 5th Armored Division. Called in my one Carpet Bomb in 27.06 to unclog the British Beaches. 7:1 odds...result D2R2 - could’ve been better. But I’ll go with it. Little bit of Progress through the bocage. I’m anticipating a counter attack against the Guards units that have progressed passed the Orne in 28.06. Exploited 4, 5, and 7th Armored Divisions to take Granville and push the Germans into Avaranches.


The Allies need another port.


Germans - plan to keep on to keep clogging up the bocage. However, big question, do I move 12SS back on hex to make my counter attack against the Guards a 1:1 or do I move the reduced Lehr back to 29.07 and the 84th back to Caen and Leave 12ss threatening the beach? I did the latter. So attacking 1:1 and the result is [A1]D1r1. Great result. When the Germans get the brackets, they don’t have to take the loss. But now that I look at it, there’s a gap in that bocage. Oh bother.


The Brits choose to “No Retreat” because they don’t want to lose ground in the Bocage and they will have to take a loss anyway because they would have to retreat into an EZOC...so they hold their ground. 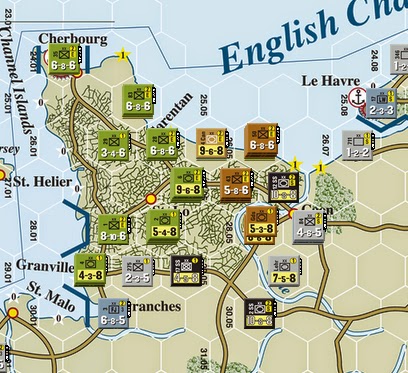