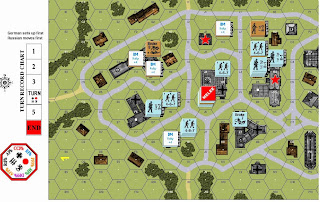 Squad Leader - The Guards Counterattack End of Game AAR
Calling it at the end of Turn 4.

German victory. The Germans were able to take back the F5 building. They ran up to the building and the Russian fire was 1/3 effective (ie broke one of 3 units.) In addition, I had forgotten that the Germans in the N4 building had taken that from the Russians, therefore requiring the Russians needing to take 3 buildings. As the Russian 10-2 and Squad tried to move across the street to get close to the I7 building, withering fire took them all out.

The Russians were able to assault the I7 building but lost in CC. The melee in J5 continued and was going to go into turn 5!

The Germans took out another leader in the woods in M5 with close assault. This left only the 8-0 leader in the buidling next to them to rally all the 5 broken units on the board.

Rereading the victory conditions makes me wonder if the Russians needed to take any buildings at all, unless they lost at least one. The condition says, "To win the soviets must completely occupy two more of the stone buildings initially occupied by the Germans than they lose of their own initial stone buidling to complet Gemran occupation..." So I read that to say, if the Soviets don't lose any buildings, they don't need to take any buildings and only need to win by a greater than 3:1 margin of unbroken squads.

Fun playing this one. I can see why it's so well regarded. Of course it was played so much because it was the first in the box.

I'm good. I scratched the itch and now I can move on. Though, I must say that it's rekindled a bit my desire to play the rest of the ASLSK scenarios I've not played. Which means tanks. Tanks. Oh my. I know, don't be scared.

Plans - I'm not breaking out anymore minis painting until the house is complete which will be a couple more months. Depending on the progress and state...oh, forget it, I probably won't get a mini game in during the same period because the house will be even more of a mess than it is now.

In addition, I'm becoming more convinced to really focus on the 6mm and growing my collection to broaden out my US with more infantry, paras, and engineers. I would also like a few more support options including Airplanes, Arty, landing craft and gliders. The Germans need some gliders, more paras, and of course they can always use more AFVs - so many. In addition, expand out the russians to include more of a bunch of items...pretty much everything.

Italians and Brits next.

I would like to "perfect" the terrain for my 6mm kit.

On the 15mm project that's been going forever: finish what i have including terrain and troops. But there's a lot of support options I need to make rounded out units via Chain of Command rules.

That said, I'm going to continue learning Vassal of TCS, and some squad level game. I know, I know, I had committed to LNL, but that's wavering as i try ATS and possibly go back to ASLSK. There are just "so many" people who play ASL compared to ATS (at least they're more vocal.) so it might be nice to play something for once with a more passionate fan base.

Geekway is getting more and more attention, so this will take some hobby time as well.
Posted by Itinerant at 7:00 AM