I'm currently going through, as a player, my 3rd campaign. I've had 2 Pathfinder and 1 D&D. In addition, I've played in a couple of Cthulu one shots. As I've played, I am coming to the realization that I enjoy the roleplaying part of RPGing more than the combat part.  In addition, I'm not fan at all of planning characters and leveling. No. Fan. At. All. In fact, one of the other players is levelling my character for me. Thank you Marshall.

So I started looking around for a simpler RPG to do some one shots or small adventures with my boys. My boys who have no experience with RPGing. Through much reading and searching I ran across Evil Hat and their remodeling of FATE. More precisely, I found their very inexpensive (in fact free) entry level version of FATE called FAE or Fate Accelerated Edition. 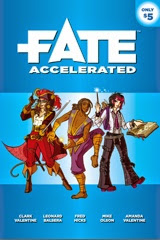 Go to DriveThruRPG to get the Pay What You Want version of FAE.

FAE and FATE is fairly easy and also made to make adventures on the fly. There are a few hacks/modifications of other RPG worlds. However, there are very few pre-written adventures out there for FAE. And every beginning GM advice says to run a simple pre-written adventure. My biggest fear of GMing - story. This is something I struggle with. So I've searched and searched for short adventures that I could either adapt or play straight.

In my search, I discovered Bulldogs an older edition FATE space adventure (I think of Firefly) RPG. Fortunately, they've created a series of short adventures for free on DriveThruRPG. Go check em out. Because they're written for FATE, it translates easily to FAE. 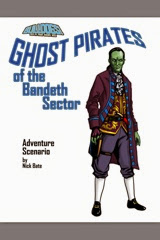 In addition, I found someone's FAE character sheets of a few of the Firefly characters that I thought I would let my kids play so they wouldn't have to worry about character creation. My 13yr old took Malcolm Reynolds. My 11 year old couldn't resist and had to create his own character. He's Seth Matheson a 325 year shape-shifter escapee from The Experiment (don't ask because I don't know yet).

I decided to start with the Bulldogs adventure Ghost Pirates of the Bandeth Sector. The crew has picked up a cargo of crates that are addressed to The Iron Prophet, who turns out to be a myth. So how will the crew handle their first adventure delivering product to a myth?

I'll continue with how the first session went in the next post.

http://rpg.drivethrustuff.com/product/97044/Ghost-Pirates-of-the-Bandeth-Sector-A-Bulldogs-Adventure-Scenario
Posted by Itinerant at 11:31 AM