Thank you again Klat and clansittingducks for the permission to reprint their forum battle report of Alpha Strike here on the blog.  Also, you go to the Battletech forums to see all the pics.

The first will be clansittingducks perspective: 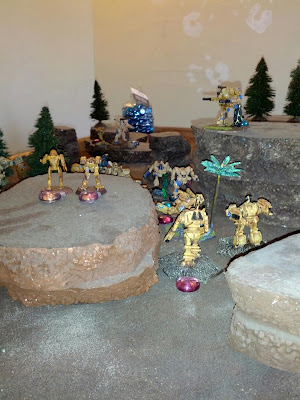 So we begin with maneuvering our forces, Klats luck with the dice on init did not bode well for him for the rest of this game.

I run my bulldogs and remaining Tokegawa's through the city into the mesa maze forcing Klats lance to deal with the tanks, or get shot up while focusing on my mechs, he went for the tanks and ... well it was bloody.

Our first turn of shooting left a lasting impression as the damaged mechs began to fall like flies. Two of my bulldogs were destroyed with the remaining two left to cause enough of a headache. 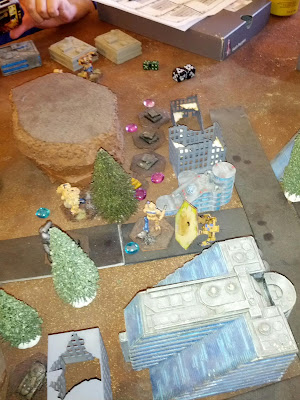 The grand scrum in the mesa maze began in earnest and holy crap this turned into a scrap yard within two turns of shooting.

My poor marauder got knocked out on the first turn of shooting and died standing. Klats mechs in the mesa converged upon the Flankers while his commander in his Marauder II jumped into the thick of the fighting

The Tokegawa's began their breakthrough and ended up with a single Thunderbolt 10-M to impede their progress, the Bulldogs however were unable to shake off Klats forces and resigned themselves to at least slow down the lance to allow the rest of the tanks to get to the mesa. My scout lance ran to support the Tanks after his Heliopolis (AKA Grappa) was killed by my Raven in his rear arc. The Grappa missed with its direct artillery fire but it drifted into my commando and Cicada, nearly destroying them both.

The grand scrum in the mesa began to take its toll, Klats commander was flanked by my commander in his AS7-D (yes I flanked somebody with an Atlas) yet lost my Longbow to the 10-behind it, one of my Bulldogs was killed with the other surviving yet again to harass another turn. 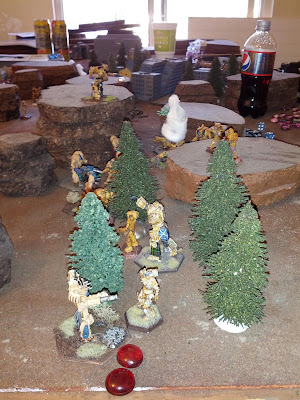 Klat fought on despite the loss of his commander and a majority of his mechs by the third turn of shooting and kicked the last Bulldog killing it, my scout lance approached with the rest of my forces turning towards the final two mechs on the board. The locust killed the Defiance, but in turn got blasted to scrap by the same mech, the penny was wiped out by focused fire from the three remaining Tokegawa's.

All in all that was a rather brutal 4 turns of shooting. Within the first two turns we gave it as good as we could, and so did Klat. But he was still out numbered, those Tokegawa's and Bulldogs were the star players of this game as they managed to tie up everything they encountered, preventing Klat from sweeping in from behind my mechs. His Marauder II really held its own for the entire game, but attrition brought it down, all in all it was a blast and I cant wait for our next game.


The big thing tho is if you want solid mechs 3025 is the way to go. at Skill 4 your not going to hit often, but you will out number the Op-For if they run newer generation stuff. Take a few cavalry lances as they will serve you well if you use them properly, and the big thing is tanks are not there just to die. They can hold a line fairly well and dish it out in return. At 6 points each the Bulldogs were more than able to survive a few turns of shooting, but the Tokegawa's are twice as armored and do a little more damage at 7 points each. Those numbers are not to be laughed at and I plan on taking these guys whenever I can get a chance to.


Having come back to the game my initiative rolls were miserable. Faced with an overheated BLR-4S that couldn't hit the broadside of a barn and what was turning into a dog pile nearby I elected to have the BattleMaster melee with the Hatchetman while my Marauder II maintained the high ground. Most units went for a badly weakened Marauder in the hopes of lessening the OpFor's numbers once the unavoidable scrum started.

The next turn an entire Lance of 'Mechs got hung-up on a group of Bulldog tanks that they simply could not kill fast enough. A Penthesilea, Defiance, Black Knight and Rifleman all tried and failed to wipeout the Lance of Bulldogs while getting themselves hit from behind by a collection of light 'Mechs. The Helepolis managed to do some damage to the light 'Mechs but found itself outmaneuvered...

Thanks to its TAG the Raven called fire in from multiple 'Mechs sporting semi-guided munitions and the Helepolis died an ignoble death to counterbattery fire.

The scrum in the mesa went poorly for me; a Verfolger died in melee with a Banshee after taking fire and the Hatchetman hacked my BattleMaster to pieces.

With the forces in the mesa area taking a severe beating I decided that it was time for my MAD-4S to jump in and assist. Without realizing it I jumped in behind the Banshee and exposed my back arc to the AS7-D

My forces fell quickly to the close range onslaught brought forth by the OpFor's ancient machines. The die cast I found myself with only a Lance left to fight an increasingly bold enemy. My decision to fight on served only to delay the inevitable

The older 'Mechs are, simple put a better buy in AS. The AS7-D costs 19 points and demonstrated itself aptly against the 26 point MAD-4S. While my force went for quality units the OpFor demonstrated that quantity does indeed have a quality all it's own.

Numbers are a very big deal in AS. As an example my MAD-4S had a heck of a time dealing with an AS7-D despite costing significantly more points; which in turn meant I got flanked easily as my opponent could field more units. Being outnumbered means you don't get many back shots but almost always have something behind you. That, combined with the AS7-D stats meant that the only real advantage my MAD-4S has was higher defense. As long range shots don't hit often anyway I was not in a good position when Atlas and friends came after me.

That being said my rolls were garbage the whole game; I loaded TC in everything with an SRM special and got nowhere with it, my Helepolis shot like he was drunk and my BattleMaster could not even score a hit at close range. Whenfielding a quality over quantity army every shot has to count, quantity armies have the advantage of multiple rolls if not the best damage.


Klat on a question of how long a game may take:


The two big delays came from making cards and having to lookup the rules for direct fire arty. I need to keep a copy of the critical tables nearby as well since having to flip through the book took time too. Without those delays and cigarette breaks\fending off the local feline overlord I'd say the game will take a total of two hours.


Besides being really hard to hit anything the scatter made for some hair-raising moments. In my hands arty is a clunky dangerous beast, with support from spotters with TAG and probes it could be devastatingly effective. The rules work but do cause delays once scatter occurs; direct fire has a great deal of difficulty hitting. I'd say I'm very happy with all the rules, including artillery thus far.

clansittingducks opinion of the game:


I like it to be honest. We were amazed at how fast it played. Our first time playing Alpha Strike, we sat there stunned after turn one.

Numbers in this game are a big deal, cheap units are useful in this game set as while sure the Op-For will have clan tech and skill 3 pilots, you can swarm them fairly easily and just unload upon them. Try a cavalry company vs a heavy/assault company and have fun!

To be honest its nice to try to figure out how to replay this game, tactics in the regular game can work in Alpha Strike; but it still forces you to change up your thinking on the play aspect.


^ This; light fast jump capable units are scary hard to hit and can maneuver into your back arc in quick brutal fashion. I fear the day 'ducks puts a Dola on the table as can backstab very effectively. That the Dola can also ruin your ability to use C3 and call accurate arty is just scary. I'm going to field an 8S Uziel in my Lyran Regulars soon just because it's so bloody hard to hit and can go where it likes. Speed can be armor in AS.

clansittingducks sums it up well for me, though I've not played this big of a battle yet:


Im glad Alpha Strike came out, its doing somthing good for Battletech, faster play style and the ability to quickly do big battles. Its kinda awesome seeing 40 some odd mechs on the table and not have it take a few weekends to finish

I hope to see more from these guys and hopefully i can keep posting them here. They do a very thorough job of covering the game and have some good thoughts on it.

Posted by Itinerant at 7:30 AM