With Klat's and clansittingducks' permission, I'm posting an AAR battle report he posted on the Battletech forums. I'll link a couple photos with the story, but you can also see all the photos on the Battleteh forums here.

Thank you Klat (actually, i need to ask clansittingducks as well...i just realized this first one is his post.):

Klat and I got our second Alpha Strike game in today. Had to put the game on hold right as it started to get interesting, all our figures were left where they were for when we continue it later this weekend hopefully. Onwards to the report!

Points limit was set at 222. Special Munitions authorized and the location was longside 4x4 area. Fight took place in a small city with a mesa maze off to the side.

Klat fielding his Battlecorp forces (3 lances worth of mechs with his commander in his Marauder at Skill 3. Everybody else on his force was skill 4.)

My personal merc company the Mclarens Flankers showed up 4 lances strong of mechs, with two lances of tanks for support. Commander was located in my AS7-D. The entire command lance was given precision munitions as they had the highest concentration of autocannons.

Turn one was spent maneuvering our various forces, no serious shooting took place. Turn two resulted in ineffective fire from both sides. However on a lark and in order to try our hand at direct fire/indirect fire from arty, Klat lobbed death at my locust and missed, the shot however drifted into my spider and nearly killed it, causing a critical hit ammo explosions. Thank god for the ENE special ability.

Turn four my command lance began to maneuver towards klats forces while my fire support lance provided cover fire... hitting several counties over. My scout lance began towards the objectives I had set out for them and poured fire into a few of klats mechs to little effect. With my wild card lance attempting to call down indirect fire yet screwing that up.... such shame. Klats forces had about as much effect as mine did, however he did score a nasty weapon hit on my sentinel reducing it to a punching machine. A turn later the same thing happened to my own marauder. 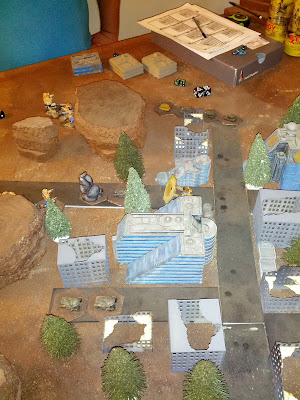 Turn six began with some nasty fire via klat and myself... he managed to rip the lead tokagawa tank apart and kill it while his kochei was killed by the bulldogs at the lead of the konga line of death. the Bulldogs raced ahead to begin their assault while the tokegawa's took a detour.

By this point our time was running short so we opted to call last turn for the day. By the end of it, one dead Kochei and one dead Tokegawa. Several mangled but still threatening mechs remained in the fight. When we pick this game back up we should have a fun fight.

One thing that helps immensely is to use glass bead counters for tracking what mechs have moved, when you are done moving go in reverse and remove them as you shoot.

We noticed that 3025 era stuff is very viable and cheap compared to newer generation stuff. I had one mech that had case, and a Raven on the table for new tech stuff. This gave me a grand total of three lances more than what Klat could field after I added up all my mechs, granted his stuff has plenty of options, but once you crack them open, they will fall apart rather quickly. I think I will need to add about 30 or so Savannah masters to my army list. At 2 points a vehicle it should be entertaining.


Should have this done by at the latest monday. After this game is wrapped up I think we are going to go for VTOL's and Aerospace fighters next.

Thanks guys for the permission, part 2 will come tomorrow.  Also, just because it may get asked, the buildings are Game Craft models.