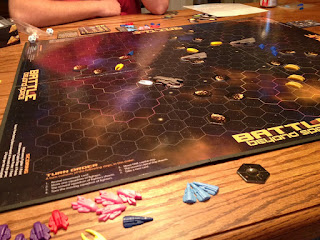 Played Battle Beyond Space before this last weekend right before the Pathfinder game because one of the players was going to be late and we had about 45 minutes. And that's about how long this simple space wargame took.

I'll let you read about it in detail on The Geek (,,,the best site for boardgames on the web...I wish there were something like it for mini games. Many miniature rules are listed. But there are very few entries.)

I had a hard time focusing because I was trying to work through what I was going to do in the RPG. Not that I would've played much better otherwise. But it's a nice filler game that I don't need to play again. Though I would if I could play one of the other factions just to get a feel how their special powers work.
Posted by Itinerant at 6:11 PM

Email ThisBlogThis!Share to TwitterShare to FacebookShare to Pinterest
Labels: Boardgames