July 11-20, 1944 - Turn 4
To make up for a missed move in turn 3, I moved that Lehr division and the 116 Arm Div into that 28.05 hole (I forgot to exploit.)Also moved 2SS up a hex.
Brits destroy 12SS, freeing up the Beaches a bit. Caen taken.
2 Canadian Armored in an expoitation is taken out by the 711 infantry div (who are also gone) but that’s a huge loss for what I got out of it.
Avaranches is taken.
2SS and 17SS are close to being surrounded.

Brits isolated units after an overrun in 28.08 and then suffered a D1r1 result. I took the loss to 11th Arm as a step and then eliminated them to ignore retreat result.

Need to figure out the supply and attack supply rules, this will come into play now. Just like in real life, supply will begin to be a stretch for the allies as they break out. Nicely modelled.

Basically Germans moved others into position to slow down the Amis from getting over to Brest and opening up another port too quickly...if that’s their plan... (which it is.)
Can’t decide as German if it’s best to slow down Allies by sacrificing Armor or if I should be pulling back. I’m thinking it’s best to battle them in the bocage. This may really hurt me.

Play note: this is tough playing such a strategic game solo. I’ve come up with plans generally what I’m trying to achieve like the Germans slowing them down in the bocage. However, as the battle spreads out now, I’ll need to make more complicated strategic decisions. For example, I’ve brought up the German 11th Arm from the south (based on a die roll) to slow down the Amis. When I came to a crossroads I rolled 2d6 comparing rolls and if the colored was higher they would protect the Brest side of things. Otherwise I would’ve taken them up toward Avaranches.

When it came to deciding if I would pull them up from the South, I decided it would happen on a roll of 5 or 6. It did and I moved them up. 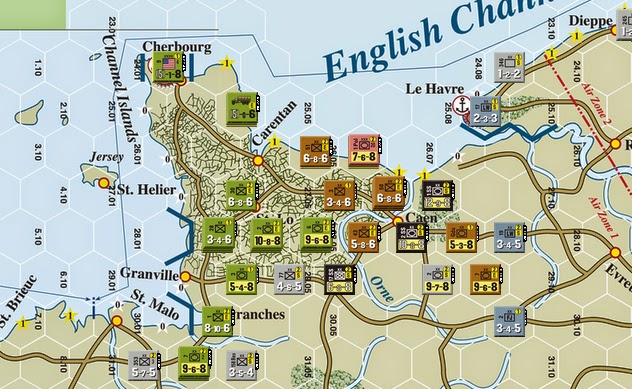