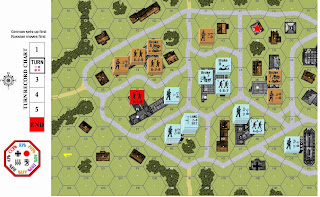 Very bloody for the attacking Russians. 6 dead squads in one turn. 3 on their turn and 3 during the German turn. The Squad Leader IFT (Infantry fire table) is brutal.

The rules are pretty straightforward. I'm using the 4th Edition Rulebook put together by Wesley Williams and posted on the BoardGameGeek SQL page. He's put all the errata together into one document. The only problem is that this version doesn't have pictures or diagrams for assistance.

I'm wanting to play this because after see all the SQL posts following John Hill's passing, I got the itch to see this again. I bought this in 1995 when I was wanting to get into wargaming. I don't know where I found it, but I bought it and tried playing with a friend with no experience. It took us a few hours on a Saturday and then we had to stop, it went in the box (couldn't leave it set up) and then it never came out again. I recall we had a good time and probably would've played more, but for some reason I never brought it out again. Regret?
Posted by Itinerant at 7:30 AM