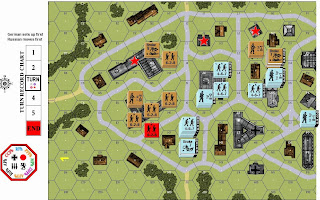 Turn 3 - Germans lost some this turn, but have made some progress in pushing the Russians back on their right flank. the Russians now own one building and only need to take one more to claim victory. Problem is they can lose any of their buildings or it will go against them and it looks like the Germans could also take the middle.

Side Notes - Interesting the Penetration fire. You fire a MG and it leaves a "residual" tracking fire. It also, and this is kind of vague for me, can leave hexes in the LOS or "LOF" firepower in those as well, in as many hexes as there are penetration. (Firepower?) Anyway, I can't tell if it means from the MG to the target hex. Or, if it means from the target hex and beyond. Also, does it accumulate?

It's defensive fire is a relic from the miniature rulesets of the day, the attacking/phasing player moves his units the full movement. The defending player/non-phasing player remembers/marks the hex he wants to fire opp-fire or defensive fire. In the defensive fire phase you move the units back and fire on them.  I found optional rules that call them simultaneous Defensive Fire/Movement. I'm using these.

Also, the Russians, when Broken have a morale of 8 and I can't seem to get them rallied. And the Germans who are 7's are rallying. Go figure dice.
Posted by Itinerant at 9:00 AM