I'm finally making an effort to learn these rules, Too Fat Lardies' Chain of Command.
Also a chance to use my new 2x4 plywood panels to make a 4x4 table upstairs.
Table after patrol phase - jump off points are tiny markers. 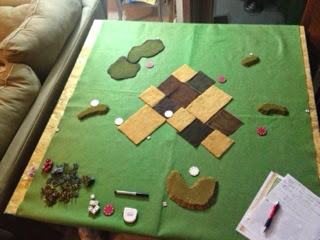 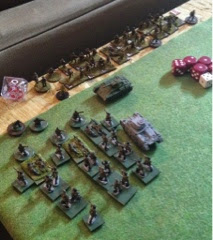 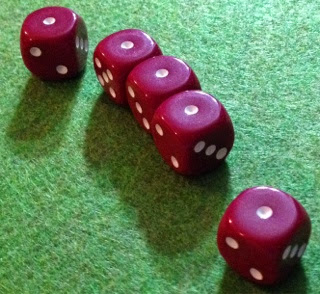 A Russian squad fails to make it to their intended Close Combat opponent. Fortunately, the next phase is their's due to double 6s being rolled on the Command Die. 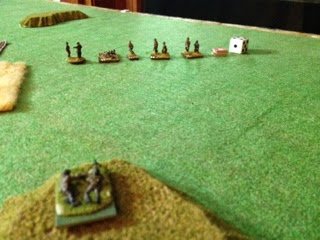 Force Morale after the next phase's "successful" close combat. Problem is, the Russian side wiped all the Germans but the only one left was a sole LMG crew member. He had like 6-7 shock on, this broke. 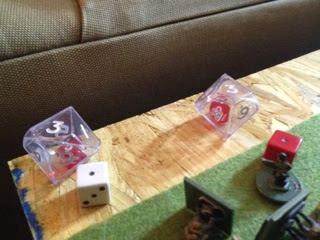 In a couple Phases, the Germans are down to a 2. This happened because the Germans sent the remnents of a team to go capture the Russian jump off point behind the woods. When they were about +8" away from the jump off point, I realized the Russians had yet to deply a squad. So I deploye them more than 6" from the Germans and rolled 17 dice against them...there's one guy left and he's bugging out.
I also realized late in the game that LMGs could attempt to harm tanks, basically set them back, perhaps give some 1 shock, but it would still be something. 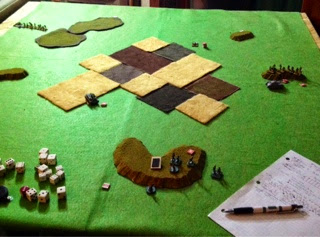 Russian victory in the Patrol scenario. 3 Morale to 0. Germans lost one Jump-Off Point due to losing Morale.

Finally figured out I could shoot my LMGs against the front of the tanks hopefully causing them some shock. Didn't work, but the Pz 35 did get a shot shock hit against the T-40.

Need to build better teams and support so infantry can take on tanks.

Russians need teams of any kind - their squads are built as squads only. They're not broken into teams like the German squads. Therefore, when I rolled ones, I had to combine them with another number to activate a higher level unit.

Work on the support units - I own a few l, just need to build and paint them.

Now I want to paint up the Brits I have...and yes, build up a US Armored Infantry Platoon, in honor of the 12th armored Div. But first I want to finish my Early war East Front kit. Need to find some scenarios for this period.

Posted by Itinerant at 1:23 PM