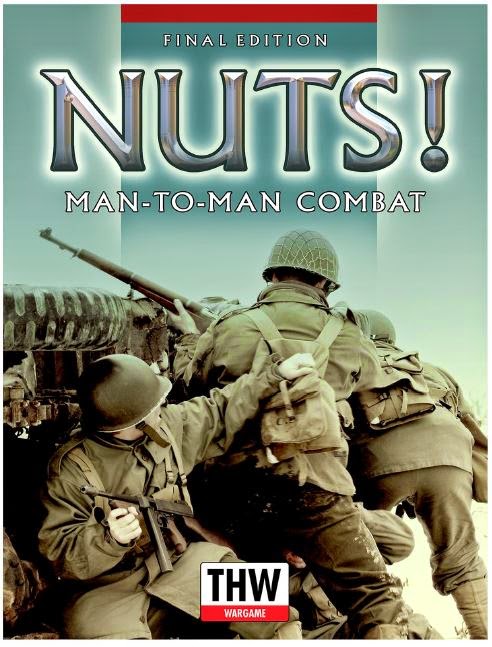 Understand I'm only to page 18, but when I was reading the section entitled "Stars and Grunts" I was hit with how this game was different than say, Bolt Action or Blitzkrieg Commander or Command Decision. Besides the scale/level of play differences, there's a different approach. Command Decision is more "serious" in it's approach, stick to the facts. Blitzkrieg Commander abstracts more, but still seems to come across as more "serious". Now Bolt Action is definitely going for some of that cinematic feel (look at the covers) but i didn't get that vibe reading through them and playing them.

I don't want to get to the "realistic" debate. I'm strictly talking feel/vibe/groove of the game. And when I read the following (italics mine), I realized that I need to take a more relaxed attitude toward the game:


WHY USE STARS?
One question that may be asked is why do we use Stars in THW? It's to give the player, personal control of his character. All Grunts are controlled by the Reaction Tests. They will behave according to their quality and training but more importantly will respond to the situations that you put them in. Grunts will behave in a realistic manner that balances a desire to stay alive with the desire to do their job. But Stars? That's you. You will see that you have much more freedom, as in real life, to do what you want, as well as some distinct advantages that separate you from the Grunts.


STAR ADVANTAGES
As a Star in NUTS! - Final Version you have four important advantages. These are:

In addition to this there are reaction tests which basically means guys start and keep firing back at each other until someone is dead or ducked into cover and out of line of sight.

You can also give one or all the figures an attribute (choose or roll from 36 choices). They can be brave, wusses, slow, fast, strong, etc. The fact that he bounces back and forth between calling the miniatures, "figures" or "characters" says a lot of the feel for the game.

He's designed it in such a way that you don't need to use the attributes if you don't want, which is nice as I learn the game. If you don't want to know this level of detail of your fighting men and have crazy heroics happening that may not be "realistic" then you may not want this. However, you read stories of crazy bravery/stupidity/etc that amaze in war accounts, so why not have them happen on your table.

As far as the rulebook itself so far. I like the way they're laid out. The PDF is bookmarked meaning you can click on the index and go to the section/page. That is nice. 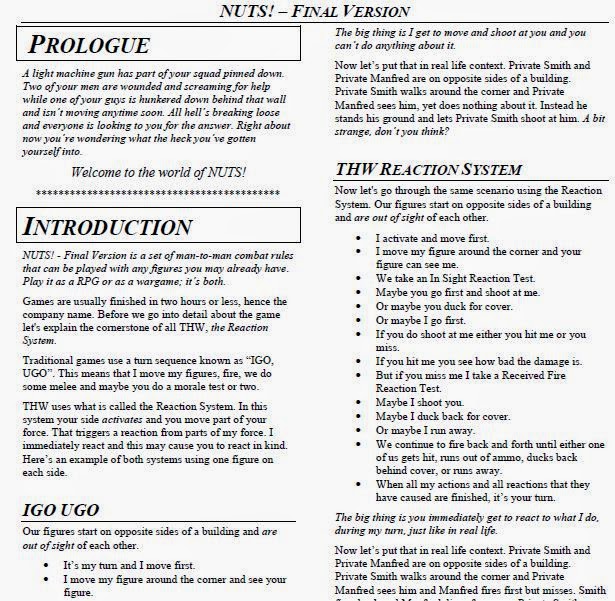 Speaking of Table of contents, they are comprehensive and are accompanied by a detailed index.

So far it seems well laid out and giving information to me in small bites.

The last thing I'll speak to about the rulebook, the instructional/textbook method of having questions and reviews after certain sections. See below for an example of one. Ed is introducing many new concepts here and he stops after each section and asks questions and highlights issues in each section. That is pretty cool. 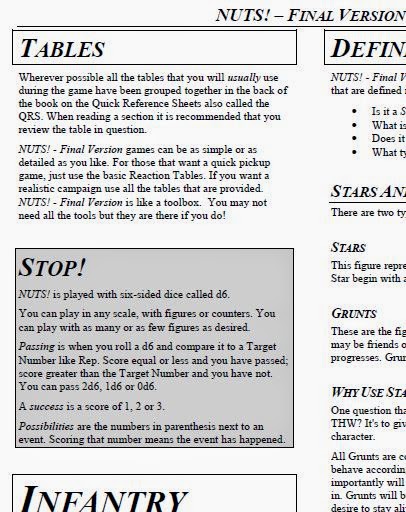 As I learn them and get some minis on the table I will give more feedback. But in the meantime, enjoy the movie/comic book of a game that is NUTS!
Posted by Itinerant at 11:02 AM