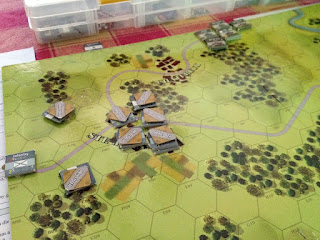 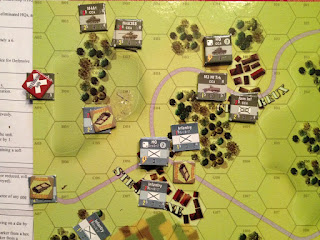 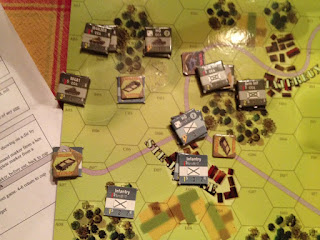 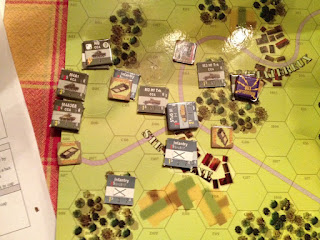 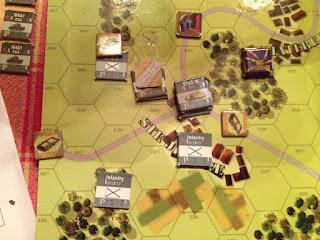 Cobra – Scenario 1 – 8 turns
The US is planning its breakout and needs to:
1: Get at least two units off the board at A0 (Board A)
Secondary Goal: Clear a path of 2 hexes, on either side of the road leading from A0 to the town of Calles.

The game begins with a bombardment – All but one of the units begins the game disrupted. One of the infantry units is reduced as well. The big hit: the Quad 20MM is destroyed – this will prove to be very important.

This also allows CCA to move with impunity their first impulse because no one can opp fire. Though, you have to be careful because once the Germans are activated (assuming they are) they will attempt to rally and if successful will then be able to fire. So the US has to be careful not to be stuck in the open.

Turn 1
The P-47 begins the turn ( a trend for the evening) and destroys the 75MM ATG – another huge hit for the supporting team! CCA just moved forward. The plan: have the tanks move quickly to get out of town and through the exit, while the infantry holds back to disrupt the Germans in town and hopefully clear them out and obtaining the second objective.
The Germans rally most of the units and shuffle a few around to adjust their defense.

Turn 2
Nothing happens, the two end turn markers come up in rapid succession.

Turn 3
P-47 comes on the scene first and disrupts the StugIII – yet another huge hit.
US – The recon M5 rushes behind the hill to go for the exit where the Germans have an infantry platoon in an Improved Position. The M5 will overrun them to let the rest of the tanks through (whoops – I’ll explain later). Infantry dismounts to go for an assault in the city.

Germans – sit idle, waiting for the attack. Probably should’ve move another infantry unit into A0. They couldn’t occupy the Improved position, but it would’ve given more fodder to absorb fire and attacks.

Turn 4
P-47 goes first again but misses their intended target, the platoon in the woods defending against the upcoming US infantry troops. Not much happens – no pics, no notes.

Turn 5
P-47 again is first and disrupts the A0 platoon. This will help to soften them for the upcoming Tank overrun. One platoon of US infantry is reduced heading toward the city. An M4 platoon is disrupted by the Stug during opportunity fire. Then on the German turn, the Stug takes them out.

Turn 6
Germans get a turn but not much happens. CCA is not drawn – not cool.

Turn 7
Realize it’s not going well for the Americans because I remember (ie read the rule) that tanks can’t overrun units in improved position. I’m going to have to take it out with HE fire from the tanks because all my infantry is stuck by the city. Fire is ineffective. US draws fire and a mounted Armored Infantry is reduced by opp fire of the Stug. 2 of the other Armored Infantry Platoons swing by the Stug and many other German units, braving opp fire to assault in the last turn. They want to at least disrupt the Stug so that it can’t opp fire on the US tanks moving for the exit.

Turn 8
P-47 again reduces the A0 infantry.
The US Armored Infantry Close Assaults the town with a Stug and Infantry platoon. I didn’t calculate well. There weren’t enough movement points for the infantry to dismount and then assault. Therefore, they need to assault as HT which doesn’t give them much of a chance. However, it turns out okay, only one is reduced and they are, of course bounced out of the city and the attack. However, the the goal is achieved and the Stug is marked Ops Complete and can’t opp fire.

The US tanks then fire away at the infantry clearing them out allowing several tanks to get out and off the road.

I only get 3 refit points for this, but fortunately only one platoon is reduced and I only lost another tank platoon. So everything else is available for the next scenario, plus what I buy and what else comes with the Scenario.

I use the 3RP for a reduced Armored Infantry platoon which I use to combine with the already reduced platoon to make one full-strength one.

The next scenario is another where I have to get units off the board but this time I will have to capture and hold a city as well. The Germans will not begin in the city, but will probably get into the city first. Need to remember the goal to win, then focus on the RP. If the US doesn’t win the Scenario, then the campaign is over. I almost lost this first scenario, which would’ve meant a demotion for me.
Posted by Itinerant at 7:07 PM