What follows is a quick battle report of a 15mm WWII game:
Late afternoon on Tuesday we had a very impromptu WW2 15mm game at my house. Due to it being a quickly scheduled game we didn't have the entire gaming group. In attendance were Dave S, Doug H, Corey S and myself.
We were playing a home brew set of rules written by Kevin M titled Platoon Commander 44.  These rules are a lot of fun, very well written and execute smoothly. Put up against most ww2 set of rules such as IABSM; it pales no comparison!
Here is a picture of the initial board.  A small French village that might be occupied by Jerry! 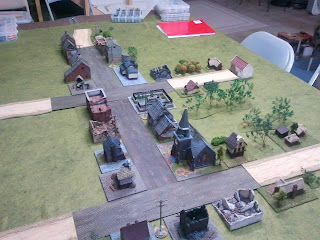 Here's some of info on the game, by Kevin, who's developing the game:

Platoon Commander is a 1 to 1 scale rules set designed to simulate military combat with each player taking command of a 30 to 50 man platoon sized organization along with some representative support weapons and vehicles.  The game can be played by as few as 2 or as many as 6-8 players.  Platoon Commander uses a one-to-one game scale for all units.  One infantry model equals one soldier, one AFV model equals one armored vehicle or tank, one artillery model equals one artillery gun, one aircraft model equals one aircraft and one truck model equals one soft transport vehicle.  Ground scale is approximately 1-inch equal 6 to 10 yards.  Each formation action simulates 5-15 minutes of time.  Each complete game turn simulates roughly 30 minutes of combat action depending upon how many units are involved per side.
All measurements are in inches and most action is resolved with D6 dice.  Most of the game play charts will fit on two sides of a single 11" sheet.

The rules are loosely based on a combination of Warhammer Epic and Frank Chadwick's Command Decision.  Activation is by formation, and formation is defined as infantry squad or tank platoon sized units.  They were originally conceived as a player activating  by squad for smaller games, 1-2 players per side, but more recently by platoon for larger games of 3 or more players per side or faster game play.
The turn sequence is simple and very open but must be followed.  Let's face it, most gamers I know only want to move and kill something, and the turn sequence encourages this.
1) Action Phase - a single marker is drawn to indicate which side may attempt activation.
2) End Phase - the action marker count is reset based on remaining formations and all orders except unactivated Overwatch orders are removed
The heart of the game is the orders.  I have always preferred games where the player makes the action decision up front and then carries it out.  It seems like a simple notion on the surface, but also seems to be difficult to master as it requires planning ahead for success.  (On that note, I am still toying with the idea of having all players secretly issue orders first; Command Decision style, and then write a new order revelation sequence.  Maybe a future play test.)  Orders available are,
1) Advance - your basic combat advancement with the opportunity to fire
2) Double - faster movement but reduced shooting accuracy
3) March - all out movement, but no shooting allowed
4) Sustained Fire - all out offensive shooting
5) Overwatch - opportunity fire at enemy units that move or shoot
6) Opportunity Hold - a hasty order that helps offset the anomalies of the turn sequence by allowing a unit to react
7) Hold - a default order when a unit does not pass an activation check
8) Engage - a close combat order
9) Under Command - the ability to combine several smaller units into a single formation
10) Marshall - allows units to regroup and remove blast markers
11) Call Fire - allows headquarters units only to call in off board artillery fire
In addition, there are several game situation markers:
1) Prone - indicates a formation has gone prone to help with save modifiers
2) Pinned - a unit that is broken but cannot or does not wish to fall back
3) Broken - morale is completely broken; unit must rally
4) Command re-roll - a pure game mechanic to smooth out the vagaries of the dice
The game mechanics for movement are pretty straight forward (all infantry moves 6" on the Advance) with the active player moving or shooting and the defensive player rolling for saves.  I prefer the idea of keeping players involved during all phases of the game by allowing them to attempt saves no matter how small the chance.  It just makes them feel better!
Most small arms and infantry support weapons are included except pistols and grenades.  Pistols because they make no significant impact in battle situations and grenades because they cause the most problems to define and so they are rolled into close combat.
The close combat sequence is somewhat lengthy but is usually bloody and decisive.  As you know, I am ready to test this process in a house to house situation which is a unique terrain situation.  My hope is it will hold up well in principal with only a few specialized rules.
The game is meant to include some transport and AFV's in the right proportion.  I have play tested this rule set  using only tanks and it plays well up to a point.  My feeling is, if you want lots of tanks, play Command Decision.  If you want single tank action, find an on-line simulation and go for it.
This rule set has the advantage of not needing to buy all of the heavy artillery pieces as the ground scale keeps most of this off board.
And most especially, thanks for your interest.  I can't wait for some play test feedback.

Kevin stated that he's willing to answer some questions - send them my way or post in the comments and I'll make sure he gets them.

Posted by Itinerant at 7:46 PM