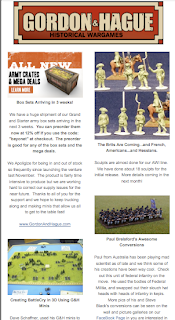 Dave, who's sent some content in for the blog is a wonder at converting board/mini games to more detailed miniature games. Because of this he made the Gordon and Hague Newsletter for his Battlecry adaptation using G&H minis.

Also, looks like G&H is coming out with some AWI figures.

Also, also, I really like how G&H is featuring his customers' work. That is good marketing to tie in with you customer base.

Also, also, also, he appears to have abandoned selling single stands and instead selling Battalion packs (which I believe are 3-5 stands for a battalion.) Good idea and it must be cheaper for him to do it this way as well.

His second edition of the rulebook is out and he's added some nice play aids.

This is a fledgling company that I hope does well going forward.