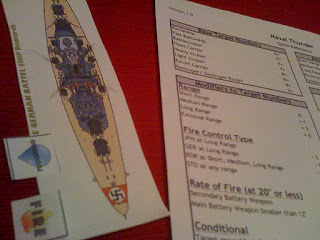 Bismark goes down in 4 turns. Fires and flooding take her down.
Prince of Wales had no damage.
Hood had rudder damage, had lost speed 2" of speed, and 1 main turret.
I should find a Prinz Eugen model, 'cause Bismark needs the help. I guess if I'm using paper I could just cut out some paper and say it's the Prinz.

The ships began the battle fairly close to start so they got into gun range immediately...which, for the sake of what I was trying to do, learn the mechanics.

I was testing the Naval Thunder ruleset out. Very straightforward and fairly easy to remember the various nation specific rules.

I enjoyed myself much more than I thought I would. I've not had much interest in Naval or Space Combat games (Tried Firestorm Armada once and just couldn't get into it.). But I saw a couple at the recent Command Con and my interest was piqued. I had fun seeing the damage done, but it's not in so much detail that it's overwhelming.

I read on the Steel Dreadnought Forums that one of the players adds the fire and flooding situations to each other. In the rules you just have one flooding marker, even if you get another flood critical. But having multiples was pretty fun reading. Though, in the case of my game, it would've been over sooner than it was.

And referring to fast play, these are pretty fast and the games are definitely fast to set up and get going.

Lastly, with the damage, shooting; and movement tracking I felt I was playing a role playing game. (Side note: for some reason the thought of keeping track of Battletechs in those games has never appealed to me. But this was fun.) I've heard these rules work very well with the pre-dreadnought era. As I type this, I wasn't even sure what it that term meant. So, now to the all knowing site, Wikipedia:


Pre-dreadnought battleship is the general term for all of the types of sea-going battleships built between the mid-1890s and 1905.[1] Pre-dreadnoughts replaced the ironclad warships of the 1870s and 1880s. Built from steel, and protected by hardened steel armour, pre-dreadnought battleships carried a main battery of very heavy guns in barbettes (open or with armored gunhouses) supported by one or more secondary batteries of lighter weapons. They were powered by coal-fuelled triple-expansion steam engines.
These battleships were abruptly made obsolete by the arrival of HMS Dreadnought in 1906. Dreadnought followed the trend in battleship design to heavier, longer-ranged guns by adopting an "all-big-gun" armament scheme of ten 12-inch (305 mm) guns; her innovative steam turbine engines also made her faster.[4]