August 1-10, 1944 Turn 6
Port of Lorient taken on the peninsula. Troops outside of Brest threaten the town for the next turn.
Rennes taken as well. St Brieue and Lannion also taken. 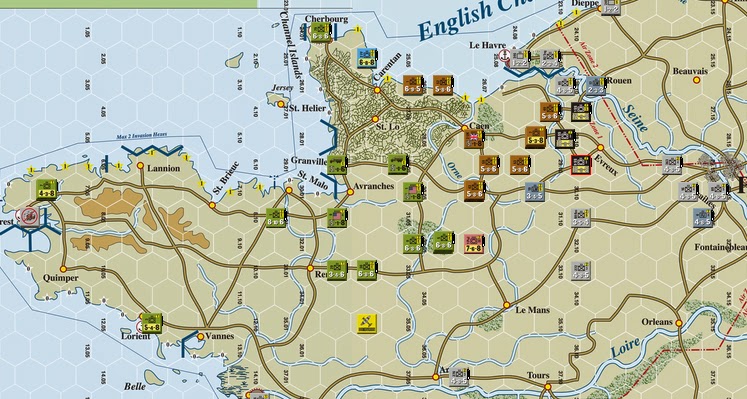 As allies I wonder how to keep the lines intact and the best way to split forces.
Looked at some books and maps for ideas. It looks like we’re ahead of schedule. Except for the attack in the South. I think I’ll attack two beaches in the South and one more up North to get more units and supply up there.


I like the idea of using the Loire as a division line or extent of operations to set up a defensive line. In addition, I’ll use te Loire to point me in the general direction of of Troyes, Langres, Belfort to the Rhine. I’ll need to launch a Southern attack to draw some German defenders and to get more supply.
Speaking of that - all my beach ports are gone next turn. Lorient comes into effect on Turn 11.


Germans are looking at the Seine as the next line of defense. They’ll use the river that is 2 hexes to the West as the first line and then back up slowly. I’m a little more curious how to handle the big open spaces to the south between the St Nazaire and Orleans.

The allies will need to worry about supply in that part of France.

Brest defenses are OOS, but since it’s a fort, they won’t need to surrender the next turn.