June 6-15th Allied turn
Holy guaco, both US airborne divisions are gone. However, they did reduce the one lone German Beach division and then a small group in the bocage.
The US then took out the German resistance and took both beaches.

The CW forces landed SE of Caen and were able to take out the small garrison force and now hold Caen. The CW landing troops had no resistance.

In the follow on turn, the Allies brought out no trucks.

The beaches have a limit on the number of troops available to land on the beach and then have a larger number for the Shipping Phase (in this case 4) later on in the turn. Normally, only 1 unit is allowed to use a beach port. Now all three beaches have 6 units on them. At the end of their next movement phase, they need to insure they don't have stacking issues. 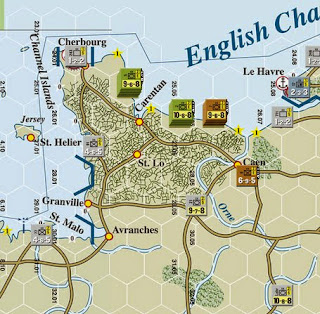