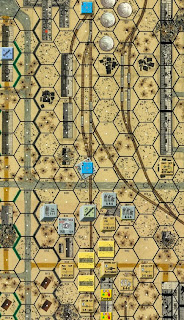 Turn 2
Russians win initiative. Mortar in middle of board reduces 2 squads hanging out in D9.
Mortar in the North M-Kills the PZIV in F8 with some good rolling (and assuming I was doing it correctly.)
Opp Fire also took out a squad that was advancing to the G10 building.

Also, the ATR in E13 is "sneaking" around to try and get a flank/rear shot on the PZ IV in E11. Otherwise the
ATRs are useless.

But is was ugly in H10. A lone German Squad was able to survive Opp Fire and infiltrated into H10 and wiped
out Cpt Itsov, a crew with an ATR and a crew with a MMG. All were broken so were eliminated as soon
as he entered their hex. The brave 6-4-8 Squad stands alone in G11 to hold the third building hex.

The immobilized PZ IV in F8 is a bummer. They would've been nice as support for the attack into the final
building.

Player note - need to check if I'm playing Opp fire correctly and it's effects against those units that were already
in the hex when the moving units underwent Opp fire.
Did I do the mortar against the tank correctly?
How would that tank be affected if they'd been there when troops underwent opp fire?
Rallying 4 morale units is TOUGH.

Posted by Itinerant at 7:30 AM