Paths of Glory - Movie not the Game

Just watched Paths of Glory - liked it. Seemed heavy handed at the end, but good. 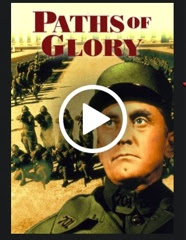 Screenshot from my Netflix iPhone window.

Good performances. And this is the first movie I would say was edited economically. What I mean I that there were several times when discussions where implied and the next scene showed the consequence. There wasn't a lot of extra fluff or exposition.

Very well showed the futility of the war, specifically the trench and back and forth of 1916.

I became interested in this because I'm reading Sleepwalkers and listening to the Dan Carlin Hard Core History podcast, currently running about WWI.

Posted by Itinerant at 8:31 PM