October 1940
Axis - 11Hus destroyed again. Overrun took out the Italian 1Med Armored. However, the Brits had to retreat into Mersa, Putting the Italians right outside the city.

Thoughts after Allied turn. This is like banging my head against the wall. I may do, what Mussolini doesn't want,but that bloated fascist is far away in italy and won't know the difference: I may pull back, just one hex east of the Mussolini line and start building some box defenses so I can protect my objectives. Not very sporting of me, but this isn't getting me  anywhere.

Allies - Nice counter attack against the Italians outside of Mersa. Killed two units and moved back to buffer Mersa from the Italians by a hex. The units destroyed were exploit cable units.

I suddenly thought I'd satisfied the Auto victory conditions because there was now only one exploit cabable unit and not 3. However, Rule 6.1 says destroyed units "continue" to count, even if rebuilt.
This doesn't make sense to me. But it's what the rule says.

The LRDG is scoping behind enemy lines.

Still building up and may attack again, depending on results of Italian November action.

Game thoughts - Both turns have taken about an hour - this will increase when the Germans and
more allies roll in. I read one report where it took two players about 22 hours to play the entire campaign. Playing solo always takes more time. 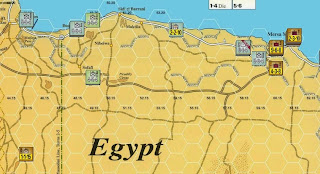