I Can't Decide What to do

As I mentioned in an earlier post, I'm in kind of a funk and also my time is just crazy right now. There isn't a lot of time for hobbying of any kind. In the big scheme it's all good because I love being with my fam and raising the boys and helping them find their passion.  In addition, supporting my wife's growing business is pretty cool.

And there are people with greater issues and problems.

Just trying to keep some perspective.

But this is a hobby blog so let's talk how this affects my hobbying. One way, is that my gamer ADHD (scientists says it afflicts 97.65% of all gamers...to varying degrees) combined with my little time makes it so I spend little tidbits of time trying to figure out what I want to play.

I've been assembling 15mm for Command Decision for a loong time.  And I partially also went to 15mm because I thought it would interest my 12 year old a bit more. It's easier to get wrapped into the lives of the little guys if you can see them as more like people than little specks of metal (6mm - don't worry, you'll always be my first love.)  I also thought it would be more attractive on a con table as way to attract onlookers. I've really enjoyed 15mm.

But the struggle with it taking so long to get these guys painted up and the lack of time and money to buy what I need, I start to waver, if I really want to keep basing them 2 to a stand and will I ever play CD with them. 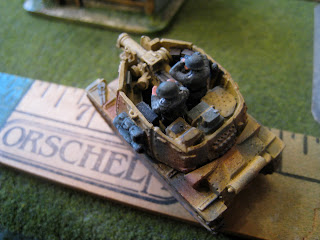 In addition, I've been trying the new slew of Squad/Platoon level games - Bolt Action, Rate of Fire, Chain of Command and deciding if I want to play any of those with the 15mm.  It's a bit of a stretch with the way I'm basing them, but it's not too bad. And I can't decide if I really like any of these.  I'm working through the Chain of Command rules right now. Again, I really want to enjoy and like Too Fat Lardies rules, so I'm trying another set.

All that said, at one point, I thought, "I really enjoy Blitzkrieg Commander II. Why don't I attempt to adapt these for WWII Platoon level games?"  Pete already created a skirmish set for Future War Commander and another BKC player sent me his WWII skirmish adaption of these rules.  But being a gamer, I'm not happy with any of this and have begun to create my own adaptation.  We'll see how this goes.  Here's a video of me explaining this as well.