Fan Made Scenario Book - In the Name of Roma


In the Name of Roma is a fan made set of 30 (!) scenarios focused on the Italian and Russian fighting on the Eastern Front.  He's selling the book for $11 and will email you the pdf.  It's amazing what fans of games will do to support the hobby they love.  These were designed with I Ain't Been Shot Mum and Chain of Command in mind, but could be used for any games that focus on Company and Platoon size of battles.

Trust me, $11 will far from cover his time and energy exhausted in creating this book.  I've not yet purchased it yet, simply because we're on a spending freeze in the Republic of Itinerant Hobbyist.


Even if you're not into that front, the scenarios could be an inspiration for you create your own.  Or, help you design your own historicals.
Below is the author's description and a screen shot from  the free scenario.

Company and Platoon level scenarios for the Eastern Front, 1941
In July of 1941, the 80° Roma Regiment of the Pasubio Division boarded a train bound for Romania. Along with the rest of the Italian Expeditionary Corps in Russia (Corpo di Spedizione Italiano), they would advance through the Ukraine alongside their German allies. In the coming months, the 80° would be engaged in brutal fighting across 1400 miles of the Eastern Front – covering most of that on foot. 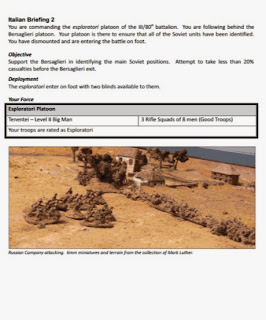 Here's a link to the website.
Posted by Itinerant at 11:26 AM