Character Creation - Ichiro (Aka The second, Aka Again, Aka Another half-baked origin story attempt) (After all is said and done I'm leaning toward Ranger then Rogue)

Contradictory personalities seem to exist in 17 year old Ichiro. On one hand a caring brother for his younger half-siblings, especially the youngest half-sister, Aiko, 4. On the other hand a reclusive boy who seems focused on bringing tension to his father’s house with lawless behaviors. With this kind of beginning, I should’ve just begun the paragraph with, “Ichiro was born on a dark and stormy night.”

Around the time he turned 13, Ichiro looked to escape the frustrations of his home. His father, Takeru had begun talk of him going back to the old country, Tian Xia, to learn the ways of (insert name of Samurai in this world) because political tensions were growing in his father’s place of birth. Ichiro was in no hurry to leave his home of Sandpoint his friends were here and as far as he could tell, the old land hadn’t been very kind to his family. As he had said in one eloquent pre-teen outburst, “If it was so great, why did you leave in the first place!” Followed by a dramatic storming out of the house.

In addition, his older brother Daichi had recently returned from his 4 year stay in the highlands at the foot of the Qiang Tan mountains learning the ways of tea farming and of the tea merchant business. Normally the return of your brother after a four year absence would be a reason for celebration. However, for Ichiro is only the return of one of his biggest adversaries. Since the day of Ichiro’s birth, Daichi blames him for their mother’s death and has never let Ichiro forget about it.

Finally, to make his 13th year even more unbearable, his oldest sister, and the eldest sibling, Kasumi was getting married and moving to the other side of the town with her new husband x, to join his family's sea merchant business. Of course this meant she would be going to sea with him sometime in the near future. Kasumi was just the opposite of the Daichi and had always cared for Ichiro. She was his sister and like the mother Ichiro lost. Their bonds were deep. He also envied her skills in the martial arts.

Below is a brief timeline of the Yamato family.

4707 - Ichiro is 17 when the story begins.
4703 - At 13 Ichiro begins running around with local gangs (I want to make them vigilante gangs. Or, challenging each other trying to break into the homes and “mansions” of the powerful to take some items of note.)
4703 - Ichiro’s half-sister, Aiko is born.
4702 - At 12 Ichiro’s father begins talk of sending Ichiro back to Tian Xia to learn the ways of the Samurai
4699 - Kenji (STC), Ichiro’s second half-brother is born.
4697 - Isamu, Ichiro’s first half-sibling, a boy, is born.
4696 - At 6 Ichiro begins taking lessons in the martial arts of ? (I’m sure there’s a name in this world.)
4695 - Takeru marries another Tian Xia immigrant, Shizuka.
4694 - Takeru opens his Tea House and Merchant business.
4693 - Yamatos arrive to Sandpoint
4693 - As the Yamatos enter Varisia a group of goblins (name which faction) partnered with horse riders raid the travelling party and take several prisoners, all of which were found dead the next morning not far from where the ambush had taken place. The Yamato twins, age 8 at the time, however were not found. To this day, their whereabouts are unknown. Needless to say, Goblins have always been a focus of rage for the family. However, the horse riders are still a mystery.
4690 - Ichiro born. Mami, Ichiro’s mother, dies during his birth. For reasons yet unclear, the Yamato family again must take the nomadic life. However, this time they must leave the land of Tian Xia and find a home elsewhere. They journey to the north and skirt in and out of the frozen Crown of the North.
4685 - The twins, Hroko (f - STC) and Jiro (m - STC)
4682 - Daichu(m) born
4680 - Kasumi(f) born
4679 - Takeru and Mai married
4678 - Takeru settles in with Tea Farmers in the highlands at the base of the Qiang Tan mountains.
4678 - Takeru flees the turmoil of his homeland. (I believe he his a Samurai in training - need to research this a bit. His clan loses in a major battle - by some kind of harsh betrayal, of course, and he is forced to flee his home in the Islands (part of the Minkai empire) of the coast of Tian Xia. Further research is required.
4664 - Mai born (Ichiro’s mom)
4661 - Takeru Yamato born (Ichiro’s dad)

I don't have the source material so I'm fudging some of the origin. But I'm trying make them more Japanese in origin.

But now, I need to focus on Ichiro and his connections to the current time, 4707.

Map below comes from a source that I will have to find later. 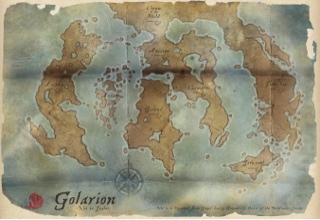 Posted by Itinerant at 7:34 AM