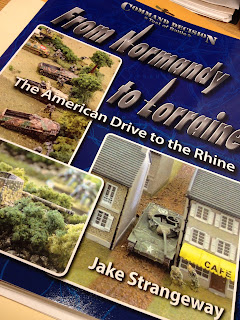 A few months ago I mentioned that I was going to be listed as a play tester in the newest Command Decision: Test of Battle Scenario book - From Normandy to Lorraine, by Jake Strangeway.

I finally ordered it and received it last week. Opened it up and there I am! I showed my 9 year old and he got a big grin on his face and said, "You're famous. Kind of."

I've not played any of the scenarios yet. However, I wanted to give an overview of what's inside.

It covers U.S. v German actions from June 7, 1944 to September 19, 1944.  Strangeway decided, I think wisely to spit up the US and Commonwealth scenarios.

I like this, for a couple of reasons. One, It gets the book out to the market more quickly. I don't own any Commonwealth forces to game with anyway. And it helps me to not be even more tempted to get other forces in this year of a seriously cut back gaming budget. (Side note: nothing saying I couldn't use my US forces as proxy or use the scenarios with tweaks here and there for this or other game systems.) 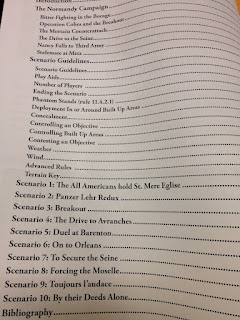 Some of the scenarios accommodate up to 12 players. However, turns out there are a couple that are suited for 2-4. Also, most take place on 6' x 8' tables.

The book has a comprehensive table of contents then includes a brief history section. I like having these because I always learn something new. Another aspect that is nice is that Jake incorporates the scenario titles so you see a bit of the bigger picture of what was going on.  For example,


"To the north, the Americans crossed near Diulouard, and secured a crossing there, beating back a German counterattack. A more complete account of the fighting can be found in Scenario 8: "Forcing the Moselle." With the German counterattack halted, Combat Command A of the 4th Armored Division began a mad dash into the enemy rear, covering 45 miles in a day and a half."

Following the history are a couple pages covering special rules, scenario guidelines, advanced rules used and how to read the maps. 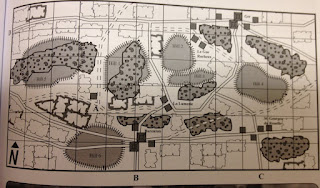 Speaking of maps...they are crazy bocage heavy, obviously. Especially the early ones. Crazy, even using cm instead of inches, I would need to work for some time to get enough hedges to make a dent. 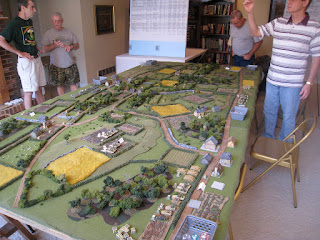 The map to the right is from Scenario 5: Duel at Barenton. This is one I play tested, see pic below it. I'm standing to the top right of the map and taking the picture to the Southwest. Here are pics from the game on my Picasa page.

The Scenarios are laid out:
Scenario Title
Date of battle
Situation
Notes: Number of Players, number of turns
Special Rules
Historical result
Map in 12" increments
Then the armies, including
Tactical notes like the following from the US side on Scenario 5:


"Your job is to press forward on your right, while checking the German advance on your left. Your mobility in your half-tracks is a great advantage, as long as you stay on the roads..."  (It continues for a couple more sentences.) 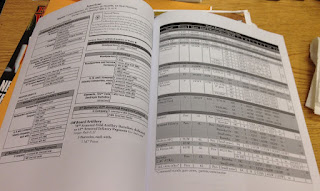 There are a few black and white photos spread throughout. They're OK. I liked the photos in the Operation Market Garden book better because there were more of them (It seems, but I didn''t count.) And, they were captioned to tie them to the scenarios.

Honestly, I probably won't play many of the scenarios in this book based on their size... at least, at my house. Jerry, who I play tested these with has all the resources and group to game some of the more giant ones, and it would be years before I get there. However, I've noticed in our games that you could divide up the scenarios into sections (Left third, middle, and right third) and battle just that side for one on one.

For example, in Scenario 8, Forcing the Moselle, the other one we play tested,  most of my time in the game was fighting one other opponent as he took the town I was in. Now, the thing you would want to do, is to have an option for reinforcements to simulate the other players on the field possibly coming to help. When we played the game we had a tank battalion that was supposed to come in and help us out. However, as it was coming on board, the German got an incredible shot, across the table, taking out the lead tank. It essentially took them out of the a large chunk of the game.

(You can see that roll and hit in the video below. This video, btw, covers all the basic steps in the sequence of play, if you're unfamiliar with CD:TOB.) Also, here are pics from the Picasa album.

To sum it up: I would buy more, especially, In the Clutches of Eagles and the Benghazi Handicap. If for nothing more than to have more scenario options and because they're well done and I want to support the crew at Test of Battle. Here's a link to the Test of Battle online store and their listing for From Normany to Lorraine.
For the main rulebook.


Command Decision: Test of Battle has a great forum, btw, if you want to ask more in depth questions of the author and players with way more experience with the game than I have.
Posted by Itinerant at 7:03 PM