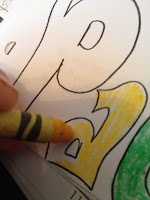 Gaming and Modeling time is at a premium lately with work and AW's business, and kids, and, and... I thought for this post I would discuss, like many of the podcasts I listen to, my general hobby/somewhat related activities:

The pic to the left shows me working on a "painting" project with my 10 year old. Helping him to color in the letters on a homework assignment. (If figure I would let him figure out the answers and read the stuff to get the work done and I would help him to do the filler work. I'm pretty confident he got the coloring part of his education down about 6 years ago.)

In addition, I saw the movie Valkyrie again. It's an enjoyable flic, keeps the tension up and is well acted in most parts. And the one battle scene seems well done. I don't  know much about the desert theatre to comment on the equipment, etc. Something doesn't seem right about the aircraft used...

And I don't know much about this particular attempt on Hitler's life. Fodder for future reading.

Saw Conan, the new version. Hmmm it re-energized my love of the Conan lore that I've had since I saw the Arnold Conan, then read the Marvel versions. However, the movie seemed flat, not epic...though they tried. It's like they ran out of money. At one point I thought I was watching a TV show - which might actually be better. Seriously, Howard's writing is very stylized - but it works for the genre and time period. I think any adaptations should adapt this somehow. I'm going to back and watch the Arnold version again. I wouldn't recommend this movie.

I'm thinking I would have enjoyed if they would've covered more Conan growing up and going through his early adventures...Not sure. Really, as I think about it more, it would make a better TV series - fits the form of the stories better.

Though I had said in an earlier post that I wasn't sure of Samurai, I'm following with interest a blog called, The Wargaming Site as he begins his journey down the road toward 6mm Samurai miniature wars.  He also did this great post of his searching for buildings and terrain of the Sengoku Samurai era.  Also, I like the way his site creates a magazine style.

Posted by Itinerant at 8:00 PM