Inspiration and Other Things Part 2

Right now, the Daft Punk playing on the Electronic Station on Spotify is inspiring me...this kind of music does this to me all the time. As I was looking for some pic to show on here about Daft Punk I ran across this video. And, no, I don't like it for the reasons that may seem obvious. I love the creativity of it all - so, here, in a major diversion for the blog is Daft Bodies (the "original" hands version is good/better - to the tune of 40,000,000 more views!):

Anyway, back to the regularly scheduled program:
I've spoke about terrain inspiration and now a few others:

The TableTop Tacticians:
I started watching their videos for inspiration and some WWII gaming (Their flames of war games)...Their first videos of their games were of unpainted models and modest boards (I started watching at the beginning of 2011. Slowly but surely, more models were painted, they seemed to have a better understanding of the rules and usually had a new face fighting their battles.
In a little over the year, they seemed to have grown a significant FOW community locally around them.

Inspiring to see a community grow.

btw, I like the objective marker with the C-47 airdropping the guys - this is what I mean by inspiration.

CommandCombat on YouTube.  He's coming up with this John Madden style of reporting his wargames which is fascinating and fun. I also like how he discusses the stats, has videos of tanks, and give analysis. Some of this will be copied/imitated/adapted at a YouTube/Blog post near you. Should note that not all of his videos have the video drawings, but the ones that do are fun. 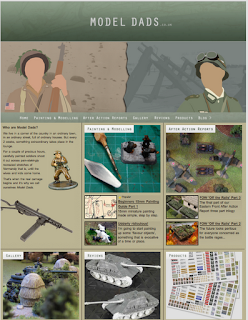 Their AARs are creative in their story telling approach.  Marketing and graphic design are interests of mine and they've nailed the Graphic Design - 10/10.


WWPD - What Would Patton Do - Again, I started listening to their podcast just to get some WWII mini gaming inspiration. Then watched some of their videos and reading their AARs. This is another community that has built up in a couple years time (seems to me anyway) It's been since I've been mini gaming anyway. They even created an AAR creator, called BatRepper, to help bloggers create consistent looking battle reports. They have an impressive 285 followers right now.

Last one for the night (it's getting late and I'm notoriously slow at writing...): The Two Half Squads. These two guys in a round about way got me into mini gaming. I started listening to them  when their podcast was fairly new and I was somewhat interested in ASL, or Advanced Squad Leader. I listened and commented on their blog (even to the point where they read one of my email comments/questions before I was even playing). And then...started playing ASLSK. Met some local ASLers and played for a short while. ASL and a one year long DnD campaign (my one and only) combined to show me the fun of rules and miniatures. With the detail of ASL rules, miniatures rules (some of them anyway) are a piece of cake. Also, playing with the DnD minis piqued my interest in seeing my games in 3D and not just on some chits.

These guys are inspiring because they're sticking to it. They're on episode 62 and still producing good stuff. I also like them because they're into it, but also very laid back with good senses of humor. ASL is such a small niche that they won't get the followers like WWPD, but they deserve it because they contribute a great and light-hearted asset to that community.

And that's it for inspiration for the night - except for one-100+ more. All the blogs I follow as well as the 42 followers. Many of the 42 have their own sites and their different ideas are an inspiration to keep upping my game...and terrain...and writing...and