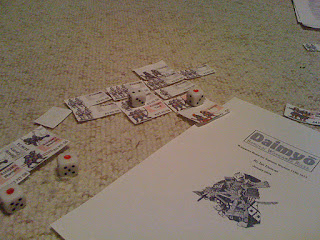 On the living room floor with some more nice paper models, similar to my ships. I got these 40x20 playing pieces from the Warmaster forum for their samurai variant. Cut some out and put Daimyo to the test.  Not too thrilled with the first 4 turns.  Something just didn't click for me.  Not sure what's next, Killer Katanas or the Warmaster Variant. I'm thinking Warmaster because I'm more familiar with the system through the BKCII and FWC games.

Some rules are like that, they just don't click (resonate) with me. Doesn't mean they're not good. I can only think of one set of rules that I thought weren't good. That was a boardgame, the new Panzerblitz. And the reason I think I had this impression - because of too high of expectations. I wanted it to have the same feel of the old Panzer Leader. And those feelings were based on my feelings as a 10 year old pulling out my dad's version of Panzer Leader and playing by the rules that I could figure out and rolling some dice. At that age it was more about setting up and dreaming of battles to come than actually fighting them.

I'm more of the camp that understands that some rules just aren't for me. For example, Firestorm Armada. Enjoyable game, nice models, etc. But after playing through them a few times I just didn't care for them. I don't have the focused energy to worry about some mechanics that may or may not be good or accurate. I just know if I'm not excited, even after a couple of playtests solo or not, then I'll move on.

I understand this isn't fair. Possibly I'm not getting enough understanding of the basics of a ruleset to let the mechanics take over. To the point where I'm not thinking about the rules and just playing the game. But that's okay. This is a big reason I don't make critical reviews. Well, one of the reasons. The biggest of which is that I'm not that great a writer. The second being that I don't have a lot of critical things to say about a game that I believe would help someone else choose or not choose it. I like reading those kinds of reviews. When I do read them, I pick out those areas that seem like the author and I agree/disagree and make a personal judgement.

A site that reviews rules well is View From the Turret: here's their review of Naval Thunder Clash of the Dreadnaughts.

What was supposed to be a short entry has become a rambling session galore. I could still talk about games I don't play but enjoy very much, again, for lack of time. These would include, Nations at War, ASL, and Combat Commander.