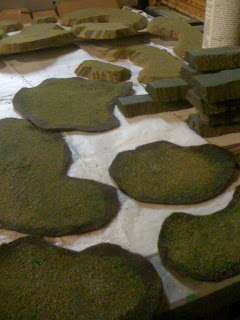 Just a small update on progress. Last weekend was crazy and nothing happened on the con game. This weekend has been more productive on this front.

I updated the task list page reflecting the progress made - feeling ok. The pic is of the forest floors I made, following loosely the ideas shared on WWPD.net

Actually, I just went back to get the link and a photo from his page (see left - his wife demonstrating the great forest). I really followed it extremely close. I was going from memory. The biggest differences on mine: I kept the edges brown for an easy border. In truth, the grass should've been on the edge and thinned out in the middle as real woods do. In addition, I used matte spray from Hobby Lobby to seal it and not hair spray.  Thank you Steve and Lydia for the helpful tutorial.

I also matte coated the armies and forests. However, I couldn't do the hills or railroad embankment becuase the matte spray went straight to the stryrofoam and began eating it away. I knew it would do this, which is why I painted the hills and embankments. However, I must not have put enough because it started eating away at the foam.

Another major thing completed, the German units and their unit designations. Photos and post forthcoming.